EVALUATING A RECORD FOUND – IN HONOR OF FATHER’S DAY

Today is a very happy day.  I have located (to the best of my belief as a genealogist) the death record for my Great Grandfather, Robert L. Bowden.  He may not have been a model father, but I still want to know about his life.

I have been trying to locate this record for over 10 years.  My grandmother, Florence Bowden Milne was Robert L. Bowden’s daughter.  She was also a genealogist who left me a lot of records about her family.  One of those records was a date of death for her father, Robert, on 9 Oct 1906.  No place of death was given.

A LITTLE BACKGROUND ABOUT MY GREAT GRANDFATHER

Robert L. Bowden was born 8 Feb 1863 in White Sulphur Springs, Greenbrier, West Virginia.  We do not know who his parents were……yet.

He married Florence Hunter on 10 Mar 1887 in Cincinnati, Hamilton, Ohio.  They had two daughters – Florence L. Bowden (my grandmother) and Edna “Denny” Mabel Bowden.  He and Florence divorced on 17 Jul 1899.

The next record I have for Robert Bowden is a 1900 census that matches close enough for me to believe it is him. 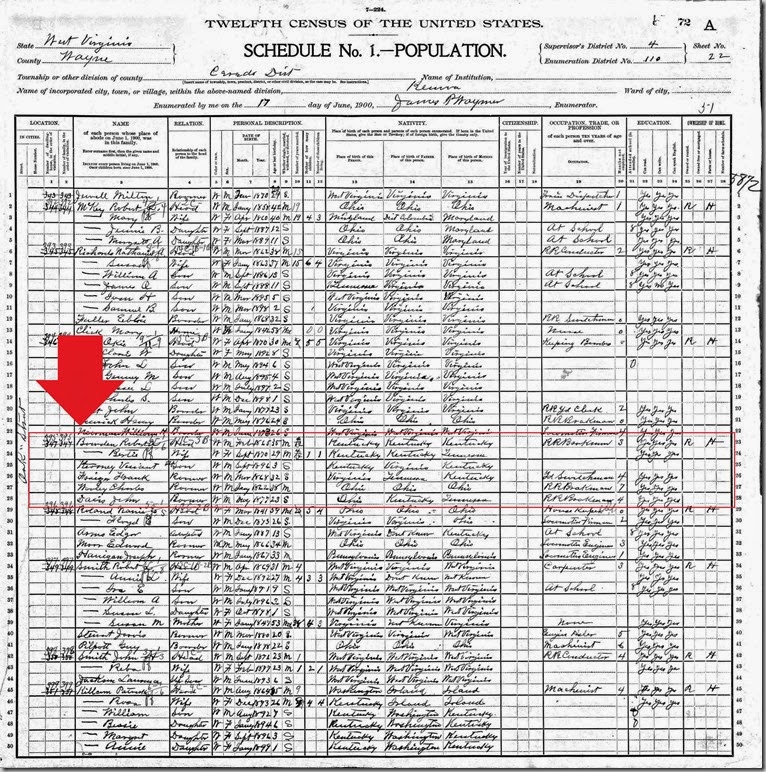 I have never located a record beyond this 1900 census, that I believe to be my Robert L. Bowden.

Since my grandmother, Florence Bowden, has seldom been wrong on her names & dates about family, I trusted that she would know at least the year of her father’s death.

Today, I decided to try once more, searching for a death record for Robert L. Bowden.  I conducted search after search on the Family Search site. I varied the name, I used an asterisk after Bow* so I would get more hits.  I searched under Bou* Bor*, you name it, I searched.  Having found nothing on that site I decided, with little hope, to search Ancestry.  I have a tree on Ancestry and I’ve searched a LOT and looked for any hints for Robert L. Bowden.  Never to find anything substantial.

We all know that new records are added all the time.  Today I searched on Ancestry for Robert L. Bowden with a death year of 1906, no location in my search.

That first record looks promising to me.  To even find a Robert L. Bowden who died in 1906, let alone the exact month my grandmother had said, and only one day different than her record.  I clicked on it with great anticipation.
I clicked on the record and here is what came up. 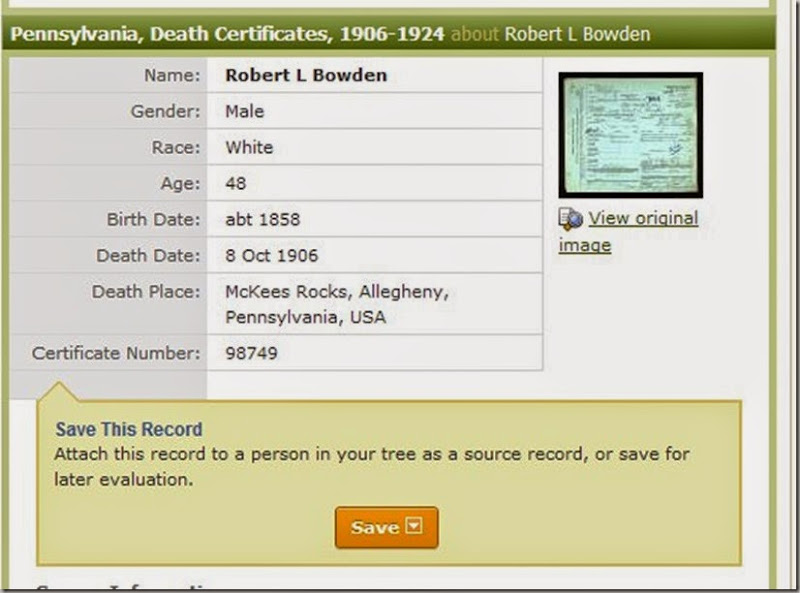 What is correct on the index?
What is off a little bit?
Now let’s take a look at the actual death certificate. 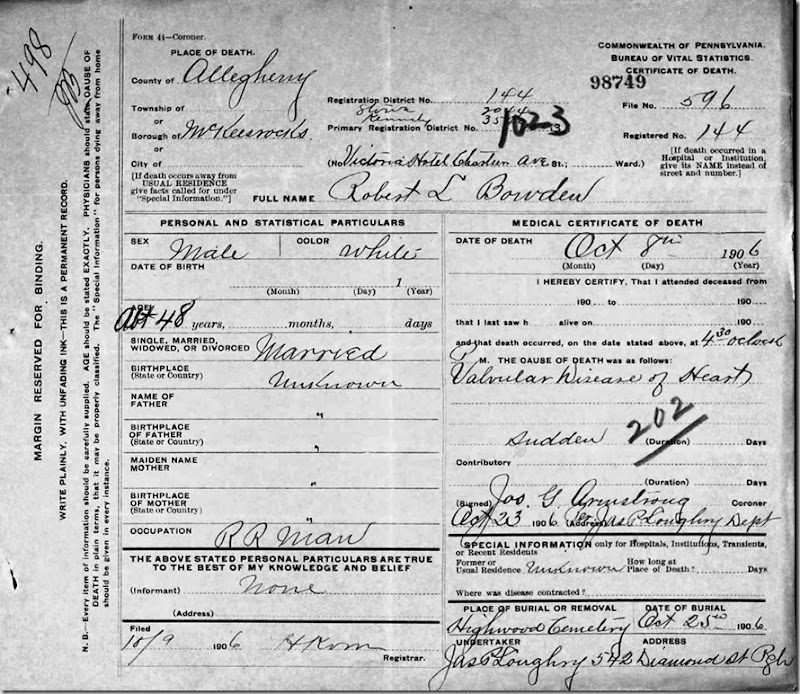 Evaluating what you see on a record with what you know.

1.  His name is a match
2.  I notice he died at a hotel, the Victoria Hotel.  As a railroad employee I know the men traveled all the time.
3.  I see the same information listed on the index page.  He is a white, male.  He died on 8 Oct 1906.  My grandmother gave his date of death as 9 Oct 1906.
4.  He is listed as married.  The last record I have that I believe to be him is a 1900 census showing him married to a woman named Bertie.
5.  His occupation is R R Man.  That’s pretty big, as he is known to have worked for the railroad in every record I have for him.
6.  He died suddenly of heart disease.  This isn’t anything I had known before.  However, the record is signed by a Coroner on 23 Oct 1906.  He is listed as having been buried until 25 Oct 1906.  This tells me that there was probably an autopsy performed.

I believe I have found my great grandfather, Robert’s, death record.  I am going to try to find more evidence to substantiate this conclusion.

Every piece of the puzzle won’t always be a match.

WHAT I WILL DO NEXT

Since I suspect there was an autopsy, I will try to find that report.  I looked online and found a website for Allegheny County Coroner Case Files.  They allow you to send an email request and they will do a look up for free.  If they find a file, they let you know and you can then submit a request for the record.  I have already sent the email this afternoon and received an auto reply back stating they have my request.

The death certificate lists his place of burial as Highwood Cemetery.  I have placed a memorial on FindAGrave - Robert L. Bowden Memorial for him.

I will contact the cemetery, if they have an office that is still operating, and try to find out more information from their records.  Who ordered the burial?  Is there a headstone?

I still need to know who Robert Bowden’s parents were.

This has been a wonderful day.  Finding a record after looking for 10 years is very rewarding.  Be able to answer those questions about our ancestors is why we do what we do.  I especially want those answers if it is a direct line, like this is.

Keep looking.  NEVER GIVE UP!  Those walls will fall……one day.