Don't ignore the "extra" people in a census is something we have all been told, read about or learned ourselves, but it bears repeating.

Yesterday I was researching the SHAVER family from Michigan.  Mostly up in the Macomb County area.  I began looking at one particular couple who had a daughter and I wanted to learn more about her.

Here is the couple:

They had one child that I know of, Ida May Shaver.  The information I had in my database listed two husbands for Ida.  The first being John “Jay” B. MAPLETHORP and the second one Burton CLOSS.

Ida had married John Maplethorp on 25 May 1891 in Richmond, Macomb, Michigan.  Their daughter Electa Fay was born in 1892.  By the time of the 1900 census Ida and her daughter were living with her parents Sherman & Mary, in Richmond, Macomb, Michigan.  Ida is still listed as married, but John Maplethorp is not enumerated with the family.  Did they divorce? 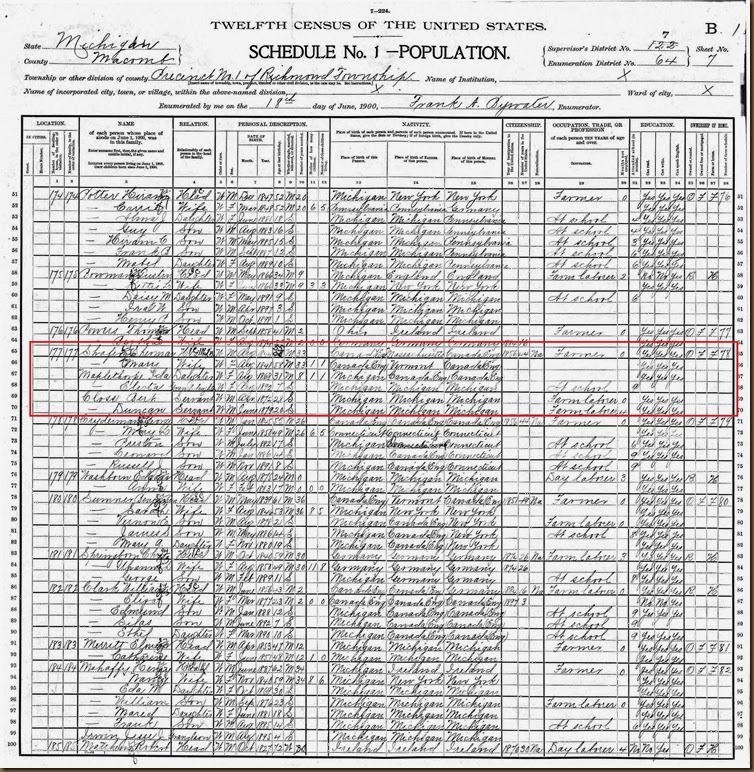 And here is a close up.  Yes, the enumerator did write the last name as Shafer instead of Shaver.

Not only did I find Ida & her daughter on this census, but as I looked at the two men also listed in the household, I saw Bert & Duncan Closs, listed as Servants/Farm Laborers.

Why was that significant?

Because I had already found a marriage record for Ida Shaver to Burton Closs on 17 Jul 1900 in Armada, Macomb, Michigan.  This census enumeration was taken on 18 Jun 1900.  This means that Ida & Burton “Bert” married just less than a month later. 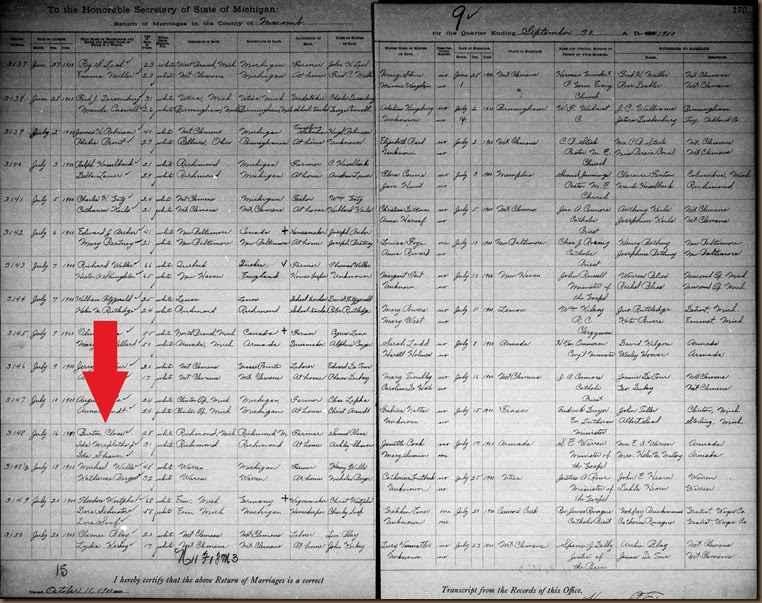 QUESTIONS I ASK MYSELF…
WHY DID I EVEN FOLLOW IDA THIS FAR?

I saw a shaky leaf on my Ancestry tree for Ida Shaver and I looked at some of the hints.  CONFESSION:  Sometimes I can’t help myself when it comes to those shaky leaves.  I admit it.  It’s the hunt and the reward of the find that is so appealing to me in researching my ancestors.  Oh, sure I want to learn as much as I can about those directly related to me.  But, sometimes just a good hour of finding records and entering them in my database is rewarding all by itself.

In answer to the question as to whether I will follow up and try to locate a divorce for Ida & John Maplethorp.  No, I won’t.  If I run across it, great.  But, I am not going to spend time looking for it.

WHAT DID I LEARN OR REINFORCE FROM THIS EXPERIENCE?

1.  Never ignore the other people listed in a household just because you don’t know who they are.

2.  Sometimes it’s just fun to follow one of the “shaky leaf” leads on Ancestry.

3.  It’s good to know when to STOP researching a particular person or family.

One more thing that I found on that 1900 census.  Two doors away from the Shaver family was the Benjamin & Sarah Sumner family, who are also in my database.  I was able to add three more children to their family from this census.  But, because they too are distantly related, I won’t pursue them further.

Keep following those leads, but remember not too go too far off the tree….unless of course you just feel like it.