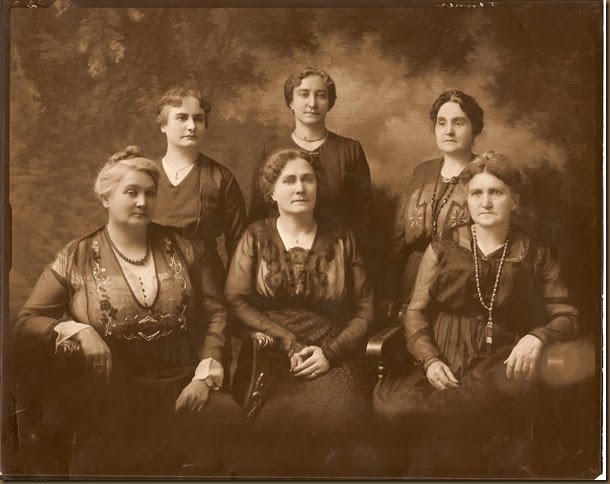 These women are the children of James Gillen HUNTER 1832-1884 and Susan Caroline BOGGS 1842-1913.  This couple married in Lawrence County, Ohio on 29 Aug 1859.  The first five children were born in Lawrence County, Ohio.  The other four were born in Kentucky.  James Hunter was a Carpenter.  Sadly, he died in 1884, at the age of 52.  That left 8 of the 9 Hunter children still at home from ages 23 down to 8 years.  It certainly cannot have been easy for Susan with all those children to care for.  She didn’t remarry for 13 years.

THE ORIGIN OF THE PHOTOGRAPH

I obtained this lovely 8 x 10 photograph from my cousin, Rick, in Michigan.  When I went back for a visit in 2007 he brought a box down from the attic that contained some items from our grandmother, Florence Bowden Milne.  Rick said he didn’t know who any of the women in the photograph were.  However, I immediately recognized our great grandmother, Florence Hunter, front row, center.  And, I also recognized two of her sisters, Ada & Myra, from other pictures I have.  Eventually I was able to correctly identify the other 3 sisters, Daisy, Stella & Grace.

Another cousin from this side of the family lives here in California.  We were talking on the phone and I mentioned that I had this particular picture of the Hunter sisters, one of which is her great grandmother.  She said “I have a photo of the six sisters also.”  She emailed her photo and I emailed her mine.  There were the sisters at the same sitting, only seated in a different order.  I’d love to show you the other photo here, but I haven’t asked permission.

THE STORY ABOUT THE TWO PHOTOS MADE IT INTO MAUREEN TAYLORS PHOTO DETECTIVE POSTING ON 1 DEC 2008.

Now this was exciting!  I read Maureen’s columns all the time and she is always asking for people to submit photos to her for dating and identifying.  She’s the author of several books about identifying photos (which I have in my library) and I love to read her articles.  When I submitted this photo and said I wanted to narrow down the date, she accepted it and wrote the following article.  I hadn’t been doing genealogy for very long, maybe 5 years, and this was exciting to me.  There was my family in an online article.

Here is a link to that posting: http://blog.familytreemagazine.com/photodetectiveblog/default,month,2008-12.aspx
I ENCOURAGE YOU TO GO TO THIS LINK TO VIEW MAUREEN'S ENTRIES.  YOU CAN LEARN A LOT ABOUT PHOTO DATING BY READING HER MATERIAL.

HERE IS THE ENTRY FROM THAT WEB PAGE. 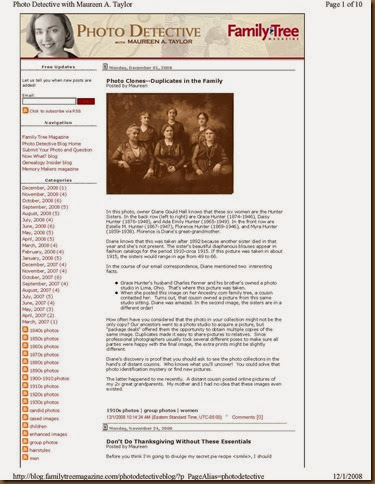 Since all of this occurred I have learned so much about the Hunter sisters and their families.  All the girls (except Lenorah) went on to marry and four of the six had children.  Of the two brothers, Clyde died in 1901 at the age of 40.  I never located any marriage records for him and in the 1900 census he is living with his sister, Myra, and her family, as a single man.

The other brother, Ralph, married twice and had two children.  He first married Helena Hill and they divorced.  Next he married Lucy Della Siler.

Of the four sisters who did have children, they had 12 between them.  I’ve had plenty of descendants to follow up on and have thoroughly enjoyed learning about this family.


A couple more pictures of the ladies in this family:


In the picture above are, standing left to right, Florence Hunter Bowden Bell (my great grandmother), Florence Bowden Milne, (my grandmother) and seated is the mother of all the HUNTER children Susan Caroline Boggs Hunter with Dorothy Milne, her great granddaughter in her lap - 1907

Here is a quick listing of the family:

James Gillen Hunter married Susan Caroline Boggs on 29 Aug 1859 in Lawrence Co., Ohio.  Here are all the children born to that union.

There is my Mother’s mother’s family.  If you are related to or researching anyone listed here or anyone descended from these families, please contact me.  There is still a lot I don’t know about them and I would love to exchange information.

Posted by Diane Gould Hall at 7:29 AM