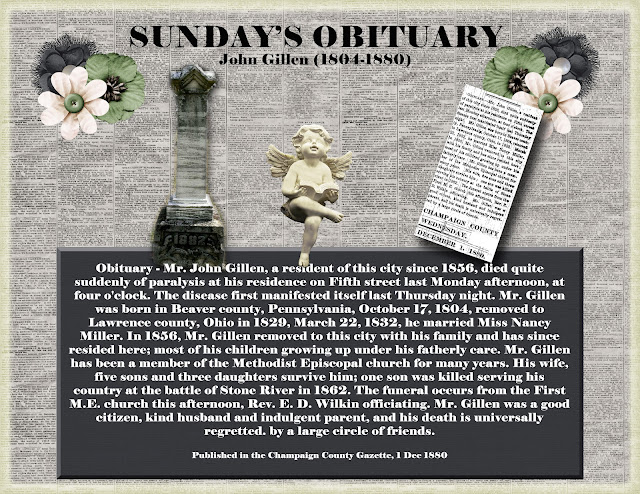 He was the oldest son of William Gillen & Rachel Frampton who are my 4th great grandparents. John was the eldest child of 8 known children born to this couple. I’ve written about this family before and you can find a couple of the posts here:

John was a Farmer according to the 1850 and 1860 census records. In the 1880 census, not long before his death he worked as a Liveryman (an owner or employee at a stable).

Here is my transcription of the obituary.

Obituary - Mr. John Gillen, a resident of this city since 1856, died quite suddenly of paralysis at his residence on Fifth street last Monday afternoon, at four o'clock. The disease first manifested itself last Thursday night. Mr. Gillen was born in Beaver county, Pennsylvania, October 17, 1804, removed to Lawrence county, Ohio in 1829, March 22, 1832, he married Miss Nancy Miller. In 1856, Mr. Gillen removed to this city with his family and has since resided here; most of his children growing up under his fatherly care. Mr. Gillen has been a member of the Methodist Episcopal church for many years. His wife, five sons and three daughters survive him; one son was killed serving his county at the battle of Stone River in 1862. The funeral occurs from the First M.E. church this afternoon, Rev. E. D. Wilkin officiating. Mr. Gillen was a good citizen, kind husband and indulgent parent, and his death is universally regretted by a large circle of friends.

With up to 9 children in the house, I expect things were quite busy for the Gillen family. He and his wife, Nancy had moved from Lawrence County, Ohio to Champaign Co., Illinois in 1856. It appears that all 9 children went with them.  Although there is one daughter, Elizabeth, born in 1835, for whom I have no details, other than her name and year of birth.

Five years later, the Civil War (also known as the War of Rebellion) breaks out. John’s 2nd and 3rd sons, John and Isaac both joined the Union Army.

Young John was the first to join on 1 Jun 1861. He was just 20 yrs. old. Sadly, he was killed at the Battle of Stones River in Tennessee on 31 Dec 1862.  According to his Civil War pension file he was shot in the right lung. You can read about this young man, age 21 at the time of his death here: MILTARY MONDAY ~ Civil War Pension File–Private John Gillen–Killed in Action 31 Dec 1862 at the Battle of Stones River

It was 3 yrs later when John’s son Isaac joined and fought in the Civil War. Happily, he did come home.

You have to think it was a very stressful time for the family.  As it was for all the families living during this time of unrest in our country.