Sarah Gillen, born 12 Oct 1808 in Pennsylvania, was the 3rd of 8 children born to William Gillen & Rachel FRAMPTON.  All the children lived to adulthood.

Sarah was the older sister of my 3rd great grandmother, Emily Gillen HUNTER (1810-1887). Most of the children were only a couple of years apart.  It must have meant a lively household for this Gillen family.

According to the probate record for Stephen Wilson, he owned a store and quite a lot of land in the Lawrence County, Ohio area.  The store was named S. Wilson & Sons.  After Stephen’s death the store was co owned by his son, John and wife Sarah.

In 1857, Sarah & Stephen’s oldest son, William died.   He was only 21 years old.  I have not located his death record, so I have no idea why he died so young.  It must have been heartbreaking for his family.  He is buried at Woodland Cemetery in Ironton, Lawrence, Ohio and his memorial can be found here #29372828

Stephen & Sarah had been married 44 years when Stephen died 26 Sep 1871.  Sarah was 62 and her four living children, Emily, John, Robert & Dewitt were now adults and two of them were married.

The following year, in 1872, Sarah was able to see her two youngest sons marry. Robert Stephen married Nancy Eaton on 29 Sep 1872 and Dewitt married Electa Alderman on 8 Oct 1872.  Both were married in Lawrence Co., Ohio.  It must have been a busy time for the family with two weddings within 9 days.

Stephen left Sarah with plenty of assets, which I hope gave her a comfortable life, until her death on 19 Jun 1878, at age 69.

According to the death record for Sarah, she died of heart disease.  Her obituary states that she died at her youngest son’s home, Dr. Dewitt Clinton Wilson. 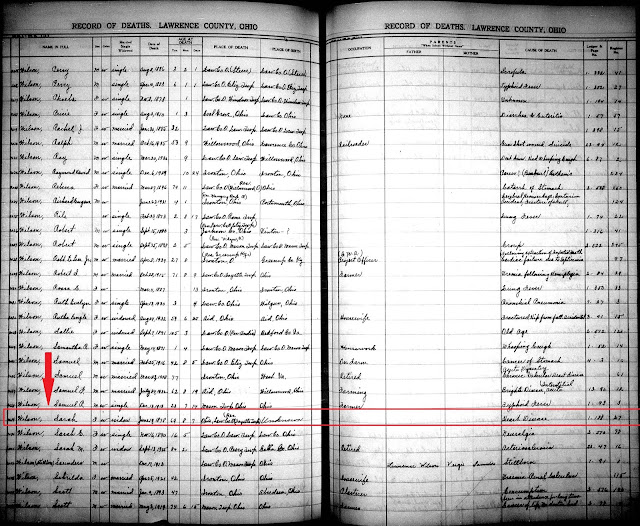 She is buried at Woodland Cemetery, along with her husband and all of her children.

If you are related to any of the people mentioned in this post, I’d love to hear from you.  I don’t have photos of either Sarah or her husband, Steven.