In all of Cora’s Scrapbook, there were only a handful of images.  One of those was a cabinet card with the image of a cake.  I might always have wondered who’s cake it was and what the occasion might have been.  Thankfully, Cora wrote on the back of the card and identified it as her own wedding cake from 5 Feb 1877.  I was pretty excited when I turned that image over and found the writing. 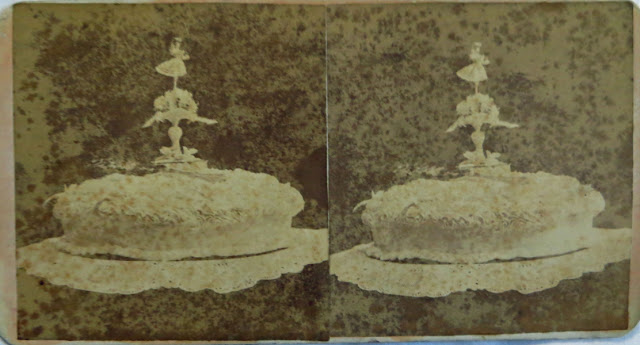 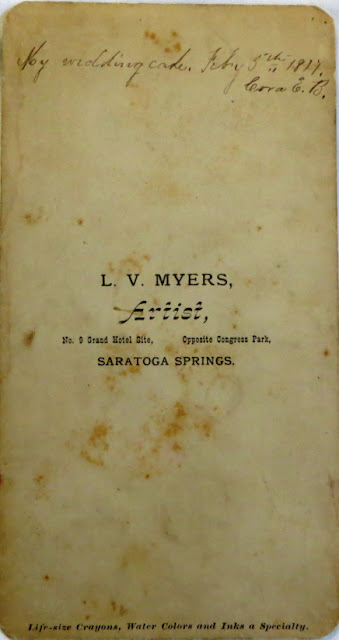 The cabinet card from from L.V. Myers, Artist, No. 9 Grand Hotel Site, Opposite Congress Park, Saratoga Springs.  And that is the exact place you will find Thomas C. Hall and family during this time of their lives.  Saratoga Springs, New York.

I had found out the date and time of Thomas and Cora’s marriage a couple of years ago.  I make research notes as I’m working on my ancestors.  I have found these notes invaluable over the years.

TIP:  I learned the hard way that I wasn’t going to remember what I’d done or what I’d located on a particular ancestor.  You think you will, but most of the time you won’t.  Sometimes we move on to some other family and may not revisit an ancestor for several years.  In this case for Cora & Thomas’ wedding here are the notes I’d made.

Dates based on her being single and living with her parents in the 1875 NY state census.  And then being married to Thomas with a 2 yr. old son in 1880.

12/28/16 - I've located a NY State census with what I believe to be a record of Thomas C. Hall living in Saratoga Springs, NY as a boarder with the Granger family.  He is working as a Clerk.  His age is listed as 30 and born in New York.

There it was, the wedding date and how I had figured it out.  I did not, however, have a place for the wedding.  That was about to change thanks to another item I found in Cora’s scrapbook

I notice another item of interest on the marriage certificate.  The names of the witnesses to their marriage.  Mrs. Charles Brown (that would be Cora’s mother) and Mrs. F. Schuyler.  I immediately recognize the name Schuyler, but have no one with that surname in my family database.  I do however, know that Cora & Thomas named their only son, Charles Schuyler Hall.  I’ve always wondered if that was a family name?  Now I can try to find out who Mrs. F. Schuyler was and perhaps connect those dots.  OH boy!  I love finding new clues.

That’s all for today’s post. I’ll keep on writing about Cora’s scrapbook.  There’s a LOT more!

Remember, if you are connected to anyone I write about, I’d love to hear from you.