Another in my series of news articles about my paternal great granduncle, Richard Lindsay (1862-1927).

Here are the other blog posts written about Richard Lindsay, so far.  My blogging has taken a hit during this Covid-19 situation.  It’s been difficult to focus and do any research or writing.  Instead, I’ve been cleaning and organizing various areas in my house. Have any of you found it difficult to conduct your research as well?  Or, have you been able to do more?

ANCESTORS IN THE NEWS ~ Will a sprig of heather from South Africa bring victory to Richard Lindsay at the polls?

FOLLOW UP FRIDAY ~ Did my great granduncle, Richard Lindsay, win that election I wrote about last month?

This particular news article is about a meeting of the Odd Fellows organization.  The meeting took place in Sault Ste. Marie, Michigan in May 1914.

I wondered what exactly was the Odd Fellows?  Are they similar to Masons?  I know that Richard Lindsay belonged to both organizations, as mentioned in other articles about him and his obituary.

I used our friend Goggle and found this Wikipedia explanation of the Odd Fellow organization.  https://en.wikipedia.org/wiki/Odd_Fellows  The answer to my question about them being the same as the Masons would be, they are similar organizations.

Here is the full page of the article which includes photos.  Richard Lindsay being second from the left. 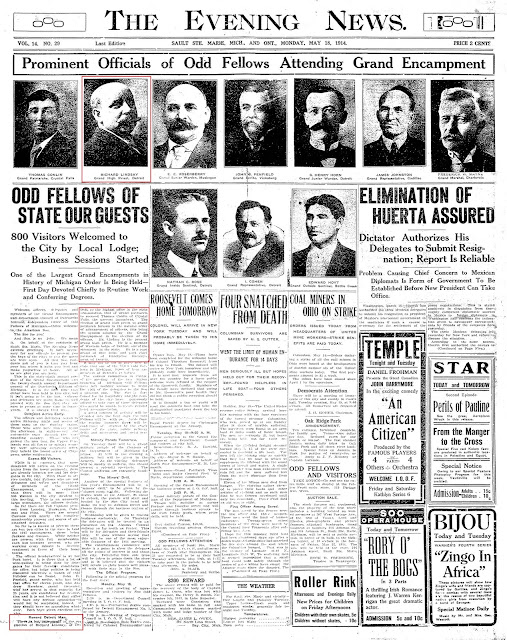 Here is a transcription of the portion of the article about Richard Lindsay.  He was slated to become the Grand Patriarch.

“Reward Detroit Man – There is but little doubt of the re-election of Richard Lindsay, of Detroit to the highest office in the state organization, that of grand patriarch, to succeed Thomas Conlin of Crystal Falls, the present incumbent.  The election of the grand high priest to grand patriarch follows in the natural order of advancement of officers, this being the system adopted by the Grand Encampment in the election of its officers.  Mr. Lindsay is the present grand high priest.  He is a member of Western Lodge of Detroit, one of the strongest in the state.  He is a past grand of that lodge and past chief patriarch of Enterprise Encampment of Detroit.”

Did you have ancestors who belonged to organizations such as these?  I have many in my family who were members of Masonic Lodges and one family involved in Canadian Order of Foresters and Companions of Foresters, among others.