SUNDAY’S OBITUARY ~ The final chapter of Harland B. Hart’s story - He was only 24 years old


Last week I shared with you the the story of Leonard Almanson Hart and his family.  That was followed by a post about his oldest son, Harland B. Hart.  I believed I had located Harland, living in Detroit, Michigan, based on the 1888 and 1890 city directories.  However, I couldn’t be positive it was him.

Thankfully, my cousin, Charles, in Michigan, has found the evidence we needed to finish Harland’s story.  This evidence does confirm that the Harland I located in those Detroit directories, was the correct one.

The following death notice, not only names Harland as the eldest son of L. Hart, but also names T. H. Roberts as his employer, as listed in the 1890 directory.

The following death notice was published in The State Republican, Lansing, Michigan on 18 Dec. 1890.

Here is a transcription of the death notice

A dispatch from Detroit this morning announces the sudden death of Harley B. Hart, formerly of Lansing, but for some time in the employ of T. H. Robert, undertaker. Deceased was twenty-four years of age and eldest son of L. Hart of Millets.

A full obituary was published in The State Republican on 20 Dec 1890. 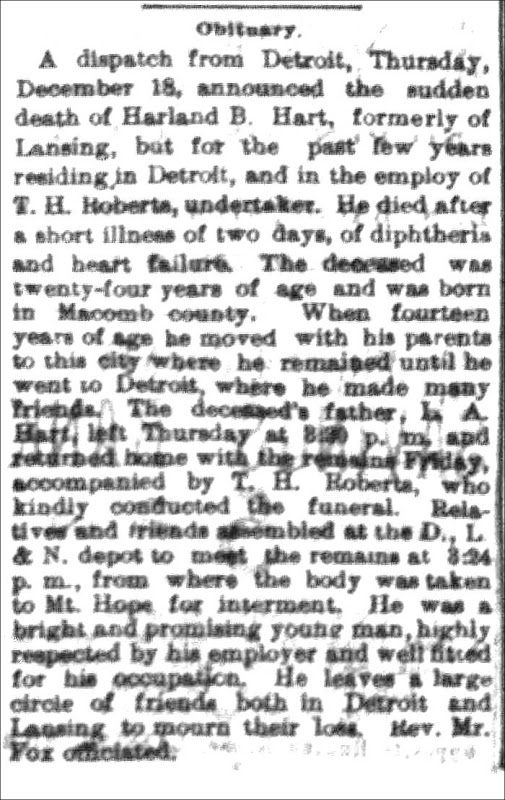 Here is a transcription of the obituary for Harland.  We now have his cause of death.

A dispatch from Detroit, Thursday, December 18, announced the sudden death of Harland B. Hart, formerly of Lansing, but for the past few years residing in Detroit, and in the employ of T. H. Roberts, undertaker.  He died after a short illness of two days, of diphtheria and heart failure.  The deceased was twenty-four years of age and was born in Macomb county.  when fourteen years of age he moved with his parents to this city where he remained until he went to Detroit, where he made many friends.  The deceased’s father, L. A. Hart, left Thursday at 8:30 p.m. and returned home with the remains Friday, accompanied by T. H. Roberts, who kindly conducted the funeral.  Relatives and friends assembled at the D. L. & N. depot to meet the remains at 3:24 p.m. from where the body was taken to Mt. Hope for interment.  He was a bright and promising young man, highly respected by his employer and well fitted for his occupation.  He leaves a large circle of friends both in Detroit and Lansing to mourn their loss.  Rev. Mr. Fox officiated.

While I was happy to learn that I’d located the correct person in those Detroit directories, it is sad to learn of the passing of Harland at such a young age. R.I.P Harland.

NOTE:  Never give up looking for the evidence of proof needed for your conclusions.  The number of cousins that I’ve connected with, since beginning my research have provided me with untold amounts of information, photos and stories.  This is one such example.  Thanks Charles!

You may visit Harland’s memorial here #17839487.  His headstone photo was taken by my cousin, Charles, and is used with permission. 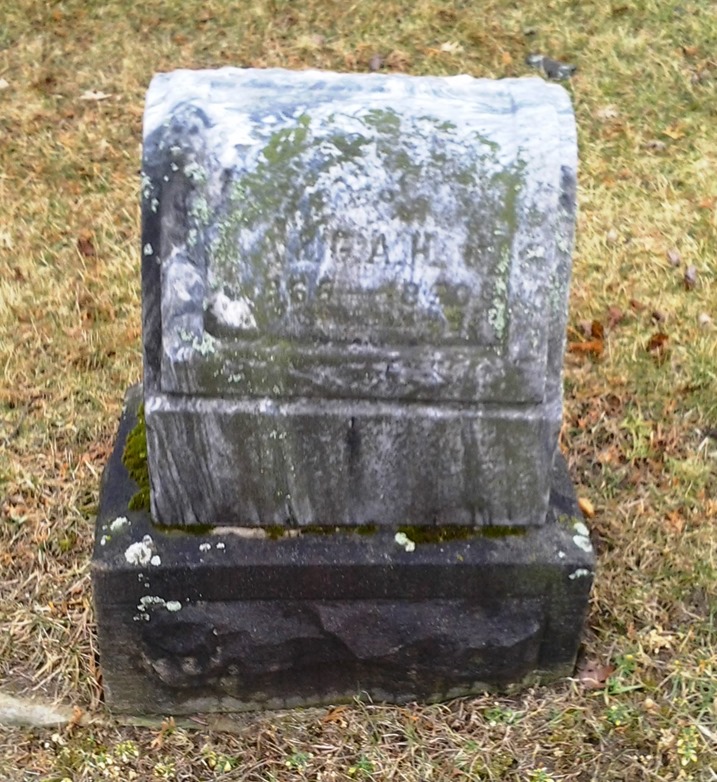