VERNOR’S ~ A MICHIGAN CLASSIC–Does our family have a connection?

If you are from Michigan, you know Vernor’s Ginger Ale.  To those of us who were born there, ever lived there or have family from there, you know that we consider it to be the “only” real ginger ale.

To read a history of the background of Vernor’s Ginger Ale, created in Detroit click here.

Since myself, my parents, my siblings and 3 of my 4 grandparents were all born in Detroit, we know Vernor’s.

My grandmother would always offer me Vernor’s if I had an upset stomach.  And oh those Boston Coolers (Vernor’s and ice cream).  Why aren’t they called Michigan Coolers or Detroit Coolers?

A couple of years ago I went to my cousin’s house just up the coast from me here in California.  We had another cousin visiting from Michigan.  Guess what was sitting on the counter when I walked in?  A BIG bottle of Vernor’s Ginger Ale.  So, you get the idea.

As I’m researching my family on my father’s side, I come across a Vernor.  Woohoo!  Are they related to “the” Vernors?  And, how does my family fit in, if it does?

Here is what my research revealed.

Below is the marriage record.  Their parent’s names are listed and match the data that I have. 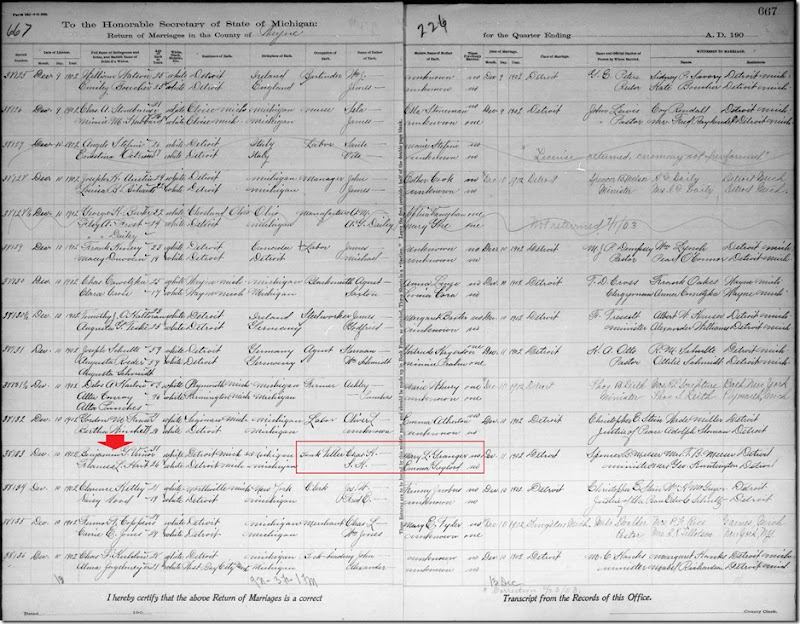 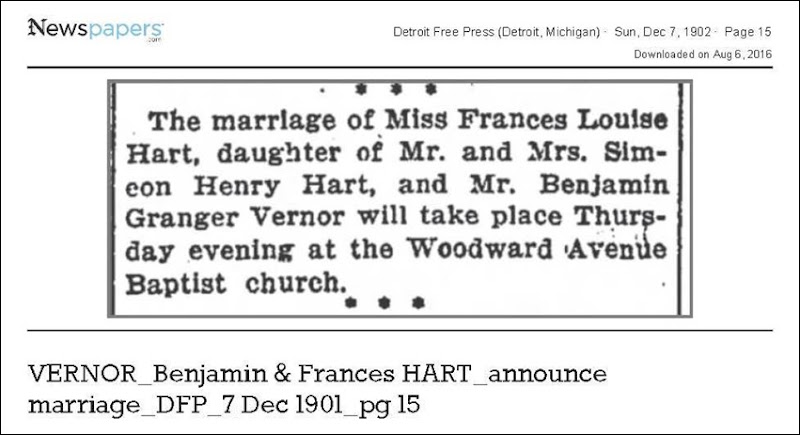 Here is an obituary for Frances L. “Fanny” Hart Vernor. 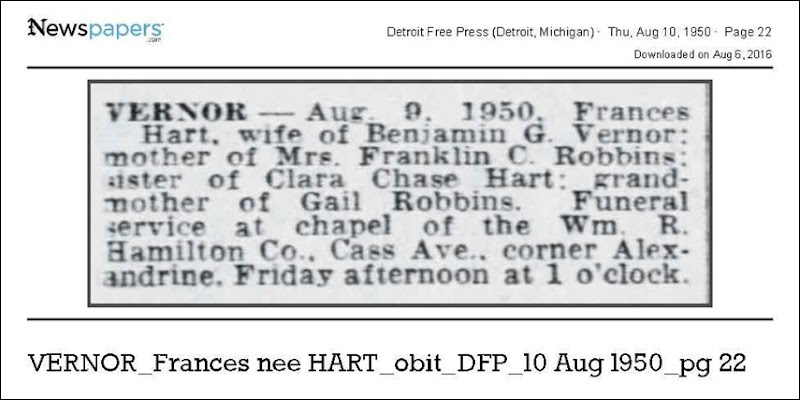 With this evidence, I have established that my 1st cousin, 3 times removed, Frances Hart, married Benjamin Vernor and was still married to him at the time of her death.  The newspaper announcement of their impending marriage gives her parents names as Mr. & Mrs. Simeon Henry Hart.  Simeon Henry Hart is my 2nd great granduncle.

I believe, based on evidence, that Benjamin Granger Vernor is the son of Charles H. Vernor who married Mary Granger, grandson of John T. Vernor & Polly Smith and the nephew of James Vernor, Sr., who invented Vernor’s Ginger Ale.

What proof do I have of this connection?

NOTE:  While there are no parents names listed on this marriage record, Polly Vernor (Charles Henry Vernor’s mother) is a witness to the marriage. 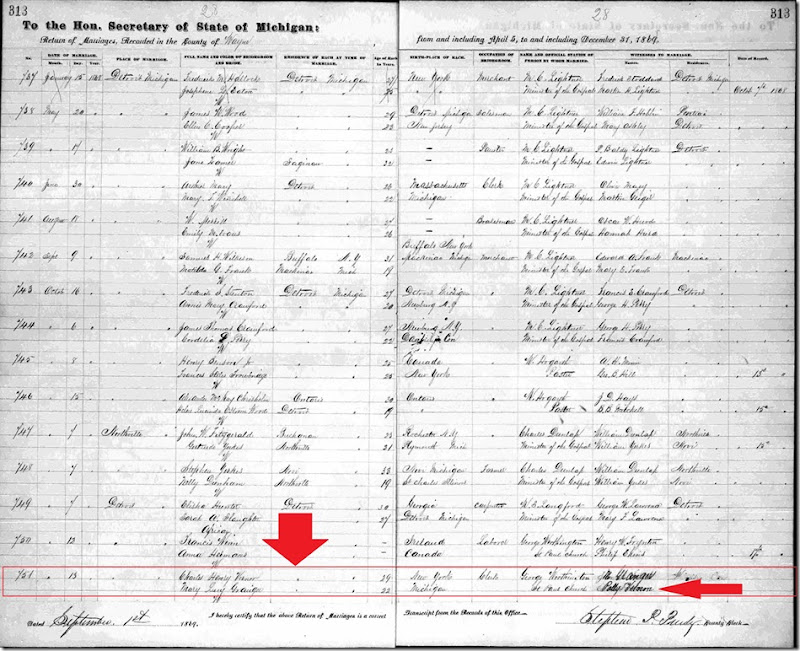 - 1900 census, Detroit, Wayne, Michigan has Charles H. Vernor, and his wife Mary, with son Benjamin G., age 28 and single, daughter Edna, age 30 and single and daughter Winifred, age 21 and single.  Benjamin is working as a bank teller.  He remains in that profession the rest of his life.

There are other pieces of evidence, but I’ll move on.

- 1860 census – J. T. Vernor and his wife Polly are living in Detroit with children: J.S., Elizabeth, Harriet, Charles H. and James (Image below)

I’m certain there is more evidence out there.  But, for the purposes of this post, I will stop here.

While not related very closely, I am still able to say that there is a family connection to the Vernor’s.  James Vernor, Sr., (inventor & purveyor of Vernor’s Ginger Ale) is my 1st cousin 3 times removed's husband's uncle.

TIP:  In conducting this research, I’ve given you an example of how to connect the dots in your own research. One record at a time you come to a conclusion, based on evidence. Sometimes that conclusion is negative and sometimes it’s positive.  Keep track of these conclusions and how you reached them.  I use the notes section in my Legacy software to keep track of my own progress and conclusions.  What do you use?

OTHER POSTS THAT MAY BE OF INTEREST
Ever Had One of Those "Slap Your Forehead" Moments In Your Research?

Have Limited Time for Research?  Here's What I Did Today in Just 60 Minutes