Finding something when you aren’t looking for it.  It surely happens to all of us.  That’s the case today with Anna M. Prediger Bezner.  Also known as Mary A. Bezner.

As I was researching the Vernor family for my last post, (you can read that post here) I was looking at the Hart family, since Frances Hart married Benjamin Vernor.  I was using Newspapers.com to find articles about the couple.

In doing so, I also came across several articles and documents for the Bezner family that married into the Hart family.  Sadly one of those articles was about the death of Anna M. Bezner.

Frederick Sr., was born in Germany in Jul 1850.  In the 1900 census he was working as a Florist.  In August 1901, Frederick died, leaving Anna a widow with at least two children at home.  I found Anna listed in a Detroit, Michigan City Directory in 1903, living at the same address as her daughter, Emma.  So, we know that after Frederick’s death Anna must have moved to Detroit.

HERE’S THE NEWSPAPER ARTICLE I LOCATED ABOUT ANNA.


So, now both the parents are dead.  There are still two under age children – Irene who would have been 13 yrs. old and young Florence who was only 10 yrs. old.

There was a Coroner’s Inquest into the accident and I located the following articles about that inquest.

All articles were located on Newspapers.com and are from the Detroit Free Press.

(CLICK ON ANY OF THESE IMAGES TO ENLARGE THEM)

I was able to locate her death certificate.  On it she is listed as Anna M. Bezner, born 29 Jun 1861 in Indiana.  Her parents names & places of birth are given.  The informant was Fred Bezner of the same address as Anna in the 1903 directory.  I believe this was her son, who would have been 27 yrs. old at this time.  You can also see the cause of death “Shock killed by st car” and “Inquest Pending.” 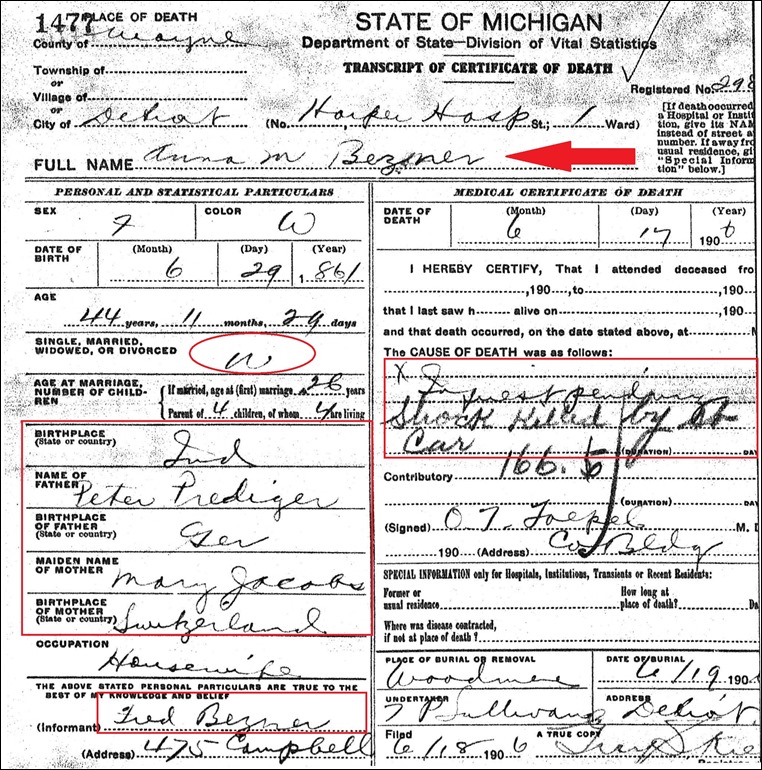 Both Anna & her husband Frederick have headstones at Elmwood Cemetery in Detroit, Michigan.  I took pictures of those headstones during a visit back in 2009.  You can visit their memorials Frederick #76369064 and Anna aka Mary #76369088.  The memorials are managed by someone else and I’ve submitted family links and edits to the memorial manager.


While Frederick and Mary Anna Bezner are not direct relations to me, I still found their story interesting.  And, once I find a story I like to follow it through.  I will continue the research and find out what became of the four children of Frederick and Anna Bezner.