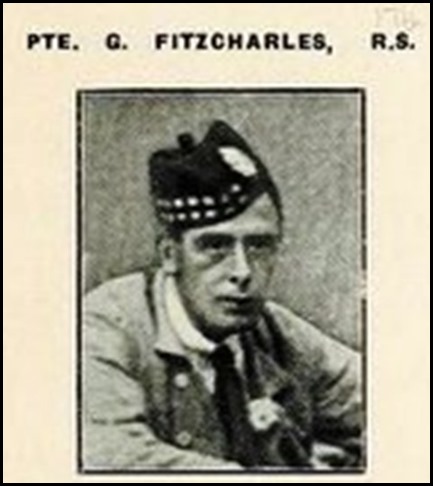 George Briggs Fitzcharles is my 1st cousin twice removed.  That makes him a nephew to my great grandmother, Elizabeth “Bessie” Fitzcharles.

First let me tell you how excited I am to be able to write anything about the Fitzcharles family.  My great grandmother’s parents remained a mystery aka brick wall to me, until 3 years ago.  Now I take the time to learn everything I can about this Scottish family.

George was working as a Brakeman for the railroad in the 1911 census, living in Grangemouth, Stirling, Scotland.

Historical events effect our lives today as they did back then.  In 1914 the “Great War” or World War I began.  You can watch a short video about it here
.
In 1915 George was working as a furniture salesman in his father’s business.  On 4 Jun 1915 he enlisted in the 1st Royal Scots.  Here are his attestation and descriptive papers upon enlistment
. 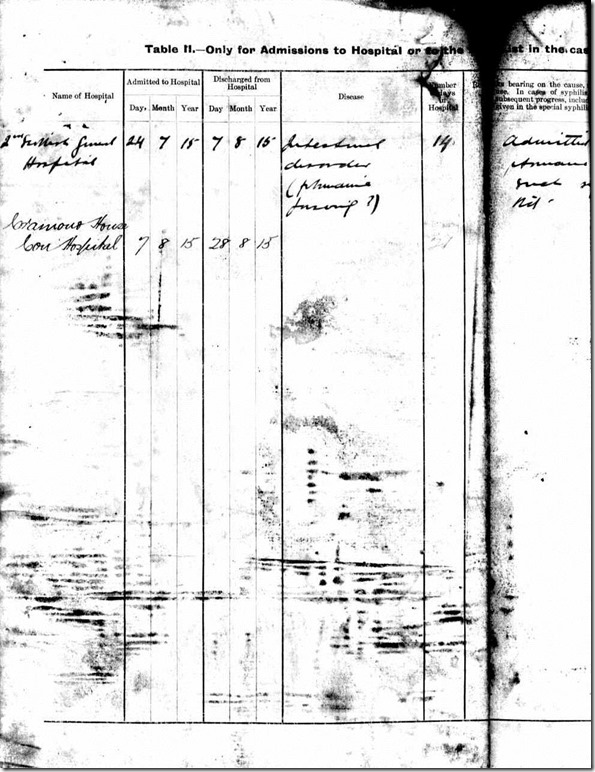 Just a little over a month after his enlistment, George was admitted to the hospital for “Intesinal disorder” and what I read to be ptomaine ? (could it be ptomaine poisoning?)  He appears to have been admitted on July 7, 1915 and discharged on August 7, 1915.  And then transferred to Cramour House Convalescent Hospital from August 7, 1915 to August 28, 1915.

On September 13, 1915,  George was admitted to the hospital a second time for a concussion of his spine.  He stayed in the Kitchener Hospital in Brighton for 5 days.  Upon which he was transferred to a military convalescent hospital. 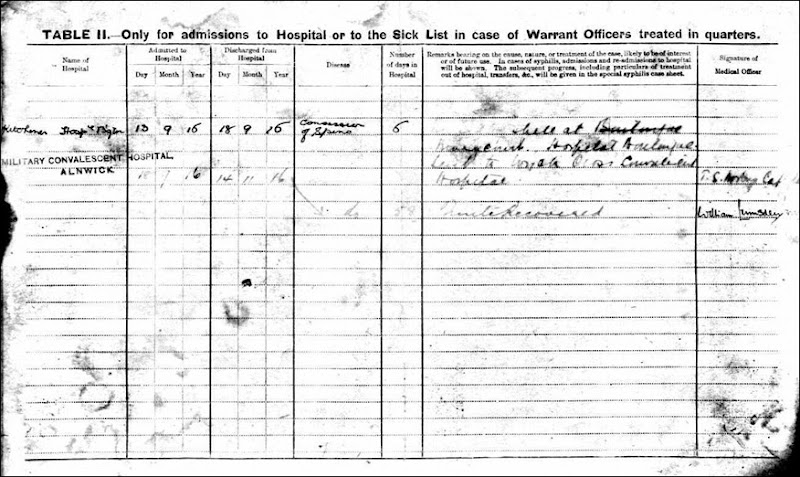 “Private George Fitzcharles, 3rd Royal Scots, 33 Park Street, Arbroath, was the son of Michael Fitzcharles, Guthrie Port. He was thirty-two years of age, had married Isabella Hutton and left a son and a daughter. He was a furniture dealer with his father when he joined the army in July 1915. He went to France in October, and was invalided home the following year suffering from shell shock and wounds. In 1917 he returned to France, was slightly wounded several times, and was killed in action on the 27th of March 1918. His platoon officer wrote of him : - ' ' He was a good soldier.  We feel his loss very much."

I have located several references to George having been killed in action during his service, including pension papers, references in books and on war memorials and correspondence with his widow, Isabella.

He is honored on the Grangemouth War Memorial in Zetland Park, situated in the center of Grangemouth.  Here is George’s name on the memorial:

He is also honored on the Pozieres Memorial in France.  Here is an index page for that memorial, showing his name. 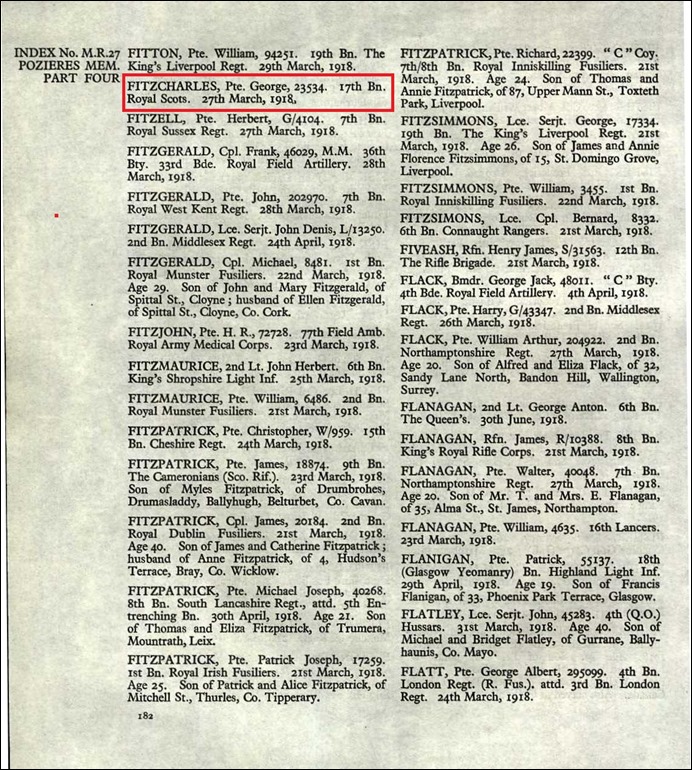 George was a young man with his whole life ahead of him.  He left behind a wife and two young children.

I located a death certificate for his widow, Isabella, and it appears she never remarried.  She is still using the surname Fitzcharles and is listed as the “widow of Private George Fitzcharles.”  She died on February 14, 1955, age 68.


PLEASE contact me if you think you might be related, even remotely, to anyone mentioned in this blog.

WHY DIDN'T I SEE THAT?  When the Obvious Escapes Us