ASHES RETURNED TO FAMILY 18 YEARS AFTER DEATH–Welcome back Harriet!


I certainly didn’t have to wonder what I was going to write about in my blog today.  Thanks to online trees, FindAGrave and Facebook, we have located a family member’s ashes, 18 years after her death.
Yesterday I sat down at my computer and opened up Ancestry.com.  I saw the little envelope icon at the top had a 1 next to it, indicating I had a message.  When I opened the message here is what I read:

Re: Harriet M. “Lynn” Pickard Dowdell
“Hi,
How did you know this lady?? I was just asked by a person I went to school with to look up Lynn’s husband and find where he was buried..well it was so easy since you had it on here..He has her ashes and her wishes were to spread them over her husbands grave. Now that I looked here and than found him listed in FAG, he will now carry out her wishes.”

What?  Someone has Harriet’s ashes?  Seriously?  After all these years?

She was my 1st cousin once removed.  That makes her my grandmother’s niece and a first cousin to my Dad.  Harriet and my father, Harry Norman Gould were only a few years apart.  Since neither of them had siblings they grew up close.

I remember hearing about Harriet when I was a little girl in Michigan, but don’t remember meeting her back then.  We left Michigan when I was 7 yrs. old.

As to Harriet’s date of birth.  That is a good question. I haven’t been able to locate a birth record.  I can only go by census records, the SSDI and her death certificate.  It seems that she liked to change that to suit her needs.  That is something I remember my Dad and my grandmother talking about.  Not only that, but she went by the name Lynn, not Harriet.  Oh, those ancestors, they do love to confuse us.

Harriet married first Howard C. Cramer on 26 Jan 1929 in Cuyahoga County, Ohio.  No children were born to this couple.  They filed for divorce five years later in 1934 in Palm Beach Co., Florida. Volume No. 52, Number 1961

Just a couple of months after James Dowdell’s death, my father moved back to Michigan, from California to live with Harriet.  My Dad was 74 years old then and in poor health.  He and Harriet thought they would be better off together and could help one another.

I went back to Michigan from my home in California, in November 1990 to visit my Dad.  Sadly, I didn’t take the time to talk to Harriet while I had the chance.  I wasn’t yet researching my family.  Isn’t this a familiar story to all of us?

My Dad died a few months later and I never saw Harriet again.

Fast forward to 2003 when I began doing family research.  I was soon in contact with my 2nd cousin, Paula, and got her interested in family research too.  Eventually, we tried to locate Harriet’s death record or evidence of her still being alive, which would be slim.
In 2013 I located a Public Records Index which I was pretty certain was her.  The address listed in this record in Wixom, Michigan is where she and my father lived.

Cousin Paula sent for a copy of Harriet aka Lynn’s death certificate based on the information we had gathered from those indexes. 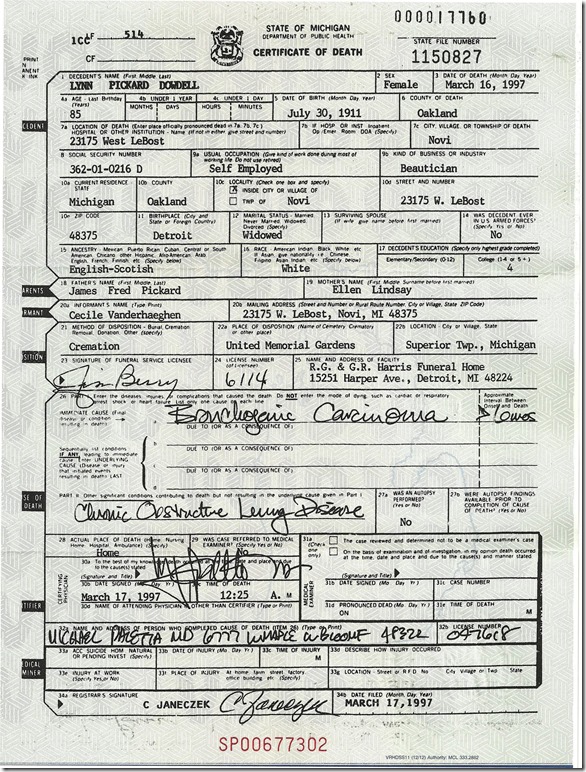 As you can see this record lists the correct parent’s names.  The informant was Cecile Vanderhaeghen, who was unknown to us.  Her remains were cremated.

My cousin Paula contacted the United Memorial Gardens who handled her cremation.  They indicated the remains were given to RG & GR Harris Funeral Home.   The funeral home wasn’t very helpful (they wouldn’t look in their archives to see what became of the ashes), but said they “probably” went to the informant if no next of kin claimed them.  Further research by Paula revealed that the informant, Cecile Vanderhaeghen had died in March 2013.

That seemed to be the end of the story.  Right?

We thought so, until I received that message on Ancestry yesterday morning.  What a surprise!

I responded to the message immediately.  My cousin, Paula, had also gotten a message from the same person.  Within an hour I was talking to the person who sent the message and within another hour I was speaking with the person who actually has Harriet’s remains.  Turns out this family had kept them because they couldn’t locate next of kin and didn’t want to be disrespectful.

HOW AMAZING IS THAT?

The person, James, who has Harriet’s ashes lives in Michigan. Paula and I are in California.  One of our other cousins, Debbie, as it turns out, only lives a mile away from James.  She went over there today and got Harriet’s ashes.  I’m sure it was a relief for those wonderful, kind people who had kept them all those years.  And, let’s not forget Marilyn who did a favor for a friend and got in touch with me on Ancestry.  We can’t thank them enough.

Harriet had no children and died without family around her.  But, apparently she was well liked by the people at the home where she lived her last few years.  That’s good to know.

None of this would have been possible without having family information on Ancestry.com and FindAGrave.  With that information it was possible to get in touch with both me and Paula and find out who we were in relation to Harriet.  A very happy ending for all.

Do you have any similar stories?  I’d love to hear them.

OTHER POSTS THAT MAY BE OF INTEREST
DID I FIND OUT WHO JULIA AUSTIN'S PARENTS WERE?  Or not?
IS THAT INDEX CORRECT?  Here's why we need to look at the actual document