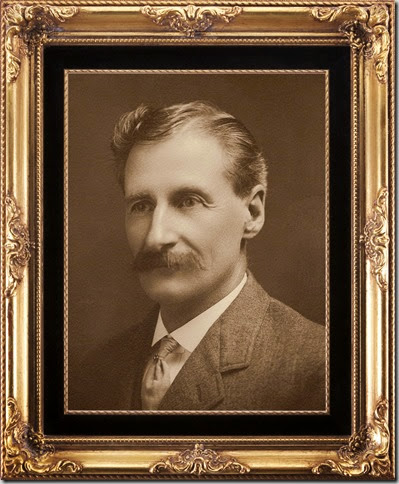 Vivaldo William Gould or as he was better known, William "Val" Gould, was my paternal great grandfather.  I never knew him as he died long before I was born.  However, my father, who was William’s grandson, spoke of him throughout my years of growing up.  My Dad called him Beepa and called his grandmother, Mae, Meema.  I have never heard those names referring to grandparents since my Dad passed.  Have you ever heard those names as nicknames for grandparents?

William “Val” Gould was born on 31 Aug 1859 in Armada, Macomb, Michigan to parents John C. Gould and Sarah M. Hart.  The family moved to Detroit, Michigan between 1870 and 1878.  William “Val” married Mary “Mae” Eve Thorp.  I have not been able to locate their marriage record.  Though heaven knows I’ve been hunting for it for many years.

“Val” & Mae had 7 children according to census records and her death record.  I know the names of 6 of those children: Ford V., Harry W., (my grandfather), Roy V., Gladys L., May A., and Helen C. I am guessing that one child died at birth or very young, as I can find no record.

From all six of those children there was only one grandchild born who grew to adulthood, my father Harry Norman Gould.

Back to William V.  He worked in a paint store or as a supervisor at a paint company for all of his life.  He worked at S. H. Hart, which was a paint manufacturing company in Detroit.  He also worked at Standard Paint & Varnish in Detroit.

I am very fortunate to have many photos of my great grandfather William “Val” Gould.  In fact, it is one of those photos which you will often see associated with this blog.

The photo on the left is William V. driving the car, with his daughter Helen in the middle and son, Roy.  In the back seat on the far right is his wife Mae.  I cannot be sure of the identities of the other two ladies.  This photo was circa 1910-1915.
The photo on the right is William (back row far right) with his wife and six children and his grandson (my Dad) circa 1915-1916. 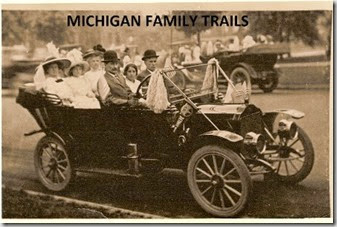 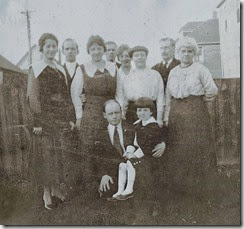 William died on 24 Feb 1924 in Detroit.  He was only 64 years old.  His cause of death was peritonitis due to a ruptured gall bladder.  He is buried with his wife and his daughter, Helen at Mt. Olivet Cemetery in Detroit, Michigan.  I have been able to visit him twice during trips back to Detroit.


Rest in peace great grandfather.  I wish I had known you.  I certainly have unanswered questions about your father, John.