I published a post, yesterday about another great find in Cora’s scrapbook.  But, that lead to some questions.  Did I get answers to those questions?

Here are the questions I asked myself:

·   Who are William & Charlotte Ayers?  There are no Ayers in my database/tree.  Were they friends or relatives?

·   Would it be possible to locate the actual church record for this marriage?

·    What other types of records would tell me more about the Pastor?

The first thing I did was search for a John Woodbridge (the Pastor) on Ancestry in census records from 1850 forward, in Saratoga Springs, NY.  I was rewarded in finding him listed in the 1870 census as a “Dd” living in Saratoga Springs with his wife and children.  I suspected that Dd meant Doctor of Divinity.  In looking on Google I confirmed that suspicion.  Now I know I have probably found Pastor John Woodbridge.

Further searching reveals Pastor Woodbridge in the Presbyterian Ministerial Directory for 1898 as follows.  And this matches up with the census records. 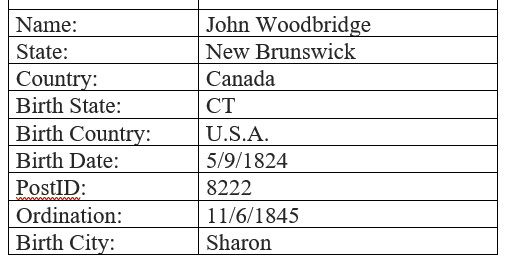 I have located them in the 1850 Federal census living in Saratoga Springs, New York and also the 1855 New York state census.  This does not tell me how they are associated with the bride and groom, but it does confirm them in the place and time of the marriage.

Can I use city directories to give me more information?  I entered Charles Brown in the Ancestry U.S. City Directories 1822-1995.  I found him in the 1882 directory on page 66.  His home address is one I’m familiar with 59 Church and I know that Charles was a Cigar Maker (although cigar is misspelled in the directory).

Knowing that directories also contain lists of businesses, churches, associations etc., I am now going to try and find the Presbyterian Churches listed

In the Table of Contents for this directory from 1882, the churches are listed on page 45.  In reviewing that page I find two Presbyterian churches listed:

Neither of these shows a pastor named John Woodbridge, but this is 31 years after the marriage record and he likely had moved on or perhaps died.

Can I locate a directory closer to the time of the marriage? I need to adjust my search on Ancestry and see if I can bring up other directories for Saratoga Springs.

The best I could do was a directory for Saratoga Springs from 1868.  That’s 17 years after the marriage, but let’s see what I can find in it.

I want you to know that I’m doing a little happy dance here.  On page 31 of the 1868 Saratoga Springs Directory is the list of churches.  And there is the “Presbyterian Church, Broadway, north of Lake avenue.  Rev John Woodbridge, D.D., residence South Broadway, a short distance below Circular street.”

I made a couple of phone calls trying to locate the actual marriage record.  Afterall, the letter signed by Pastor Woodbridge states “that record of the same has been made in the Register of the Presbyterian Church.”

Unfortunately, none of them could provide any marriage records from 1851.  I made sure to record in my Research Notes in Legacy, what organization I called, who I spoke with and the phone number.  I date all my research notes and going back to them provides me with a record of the things I’ve done in my research for a particular person or event.

When I record a marriage in my Legacy database I always include as much information as I can by using the Events/Facts entry.

Here is what this marriage looks like in my Legacy record.


In the end, I did locate more information and answered some of my questions.

Ø I still don’t know how the witnesses, William & Charlotte Ayers were connected with the bride and groom.

Ø There were 2 Presbyterian Churches in Saratoga Springs at one time, but I still don’t know which one the couple was married at.

Ø I was not able to find the original church record of the marriage.

This was a good research session and I enjoyed the process. I hope that I’ve shared some ideas that would be helpful to you in your own research.

If you are related to or connected to anyone in this or any of my other blog posts, please get in touch.