This obituary along with others, appear on various pages of Cora’s scrapbook.  I’m grateful she kept them because some of them are new to me.  I’m a newspaper hound and love to search the various websites for articles.  Some of the ones Cora kept are ones I have not been able to locate.  The only better thing would have been the names of the newspapers and dates.  Cora left that for me to figure out.

Cora’s mother Cemanthe AVERY has a sister named Mary, whom I know very little about and a brother named Calvin Montgomery Avery.  I knew he had married Caroline M. Snyder, and I have one child born to them, a daughter.  I don’t have a date of marriage for Calvin & Carolyn, but based on census records, they married between 1860 & 1865.  Will I find the marriage record in Cora’s scrapbook?  Or will some of her information lead me to finding it?

Here is a portion of the page from Cora's scrapbook, with the obituary toward the bottom.  I believe these were from two different newspapers.  I've tried finding them on newspapers.com, genealogy bank and Fulton postcards website (where I had located her husband's obituary).  No luck so far. As a result I can tell you the source. 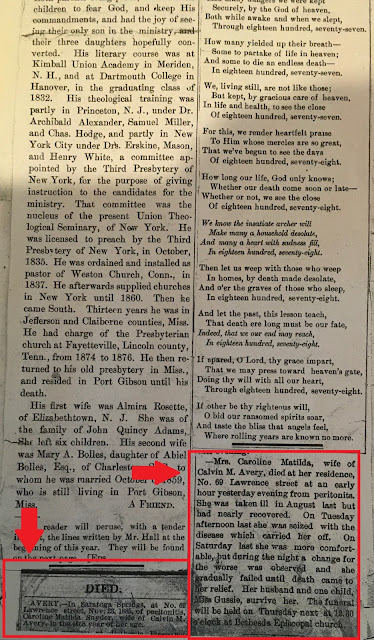 AVERY - In Saratoga Springs, at No. 69 Lawrence street, Nov 23, 1885, of peritonitis.  Caroline Matilda Snyder, wife of Calvin M. Avery, in the 44th year of her life.
Mrs. Caroline Matilda, wife of Calvin M. Avery, died at her residence, No. 69 Lawrence street at an early hour yesterday evening from peritonitis.  She was taken ill in August last but had nearly recovered.  On Tuesday afternoon last she was seized with the disease which carried her off.  On Saturday last she was more comfortable, but during the night a change for the worse, was observed and she gradually failed until death came to her relief.  Her husband and one child, Miss Gussie, survive her.  The funeral will be held on Thursday next at 12:30 o'clock at Bethesda Episcopal church. 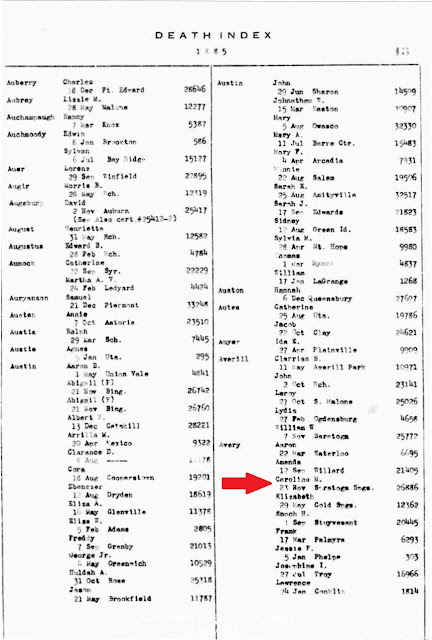 I have ordered other death records from Saratoga Springs, New York.  I expect I could request Caroline’s and may, in fact, do that.  I like to have as much documentation as I can.

Caroline’s life was fairly short, dying at age 44.  I do hope those years she had with her husband and daughter were happy ones.

ALL RIGHTS RESERVED.  NO USE WITHOUT PERMISSION
Posted by Diane Gould Hall at 3:47 PM