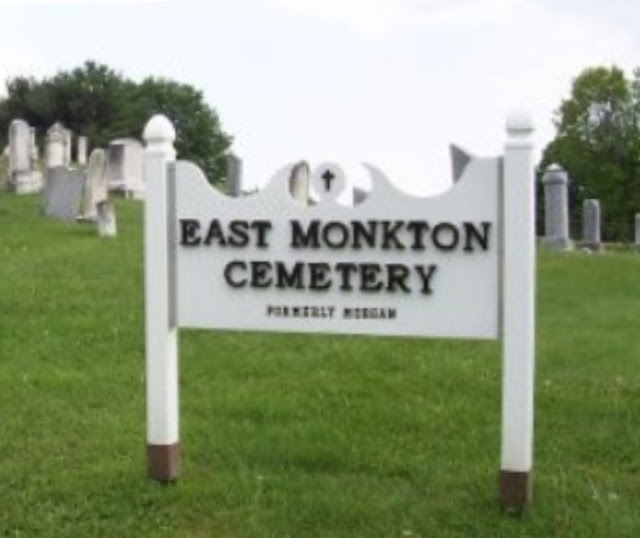 East Monkton Cemetery also know as Morgan Cemetery is in Addison County, Vermont.  You can go directly to the FindAGrave page for this cemetery here East Monkton.

According to the findagrave website there are 337 memorials added to this cemetery and 99% have been photographed.

According to the Cemetery Registry the address is 41 Church Rd., in Monkton, Addison, Vermont.  Although I conducted some pretty thorough searches on Google trying to learn more about this cemetery, it’s history etc., I didn’t have much luck.  One site said it was established in 1812.

As to the area of Monkton, Vermont I did locate this information on Wikipedia:

“Monkton is located in northern Addison County at 44°15′14.5″N 73°7′26.13″W. It is situated on the eastern edge of the Champlain Valley, in the foothills of the Green Mountains. It is bordered by the town of Ferrisburgh to the west, New Haven and Bristol to the south, and Starksboro to the east. To the north are the towns of Charlotte and Hinesburg in Chittenden County.

To find out who I have in my tree, buried at this cemetery is as easy as a few mouse click in Legay.  Master Locations>Find>type in the name and you get a list.  As long as you are consistent with your entries in any database, you should be able to easily use the “find” feature to create such lists.

As you can see I have records of 12 ancestors being buried in the cemetery.  At least these are the burials I’m aware of at this time.

How many of these do I have headstone pictures for?

Looks like I have photos for 11 of the 12.  I’m only missing Artemesia Follett Doten’s.

If you are descended from or connected with anyone mentioned here, I’d love to hear from you.  Let’s exchange information