Did that cause a little confusion in my research at the beginning.  Oh yes!  But, between my cousin Bonnie (married to a Thorp descendant) and me, we figured it all out.

Here’s a transcription of his obituary.
William H. Thorpe, steward on the D. & C. and the C. & B. lines for the last 20 years, died at the Marine Hospital Saturday of Bright's disease, from which he had been suffering for six months. He was 48 years old. Besides his widow he leaves three daughters, Mrs. W. Hayes, Mrs. J. Stanton and Miss Blanche Thorpe. He will be buried today at 2:30 o'clock from the residence of his daughter, Mrs. J. Stanton, 568 Fifteenth St. Interment will be at Elmwood cemetery.

William was only 46 years old when he died.  His widow, Catherine never remarried and lived another 32 years without him.
I haven’t done a lot of research on the Thorpe (with an “e”) line of the family.  I have William’s parents names from his death certificate as Hamilton Thorpe and Jane (maiden name not given).
Catherine and William married in Detroit on 9 Mar 1884.  They had 5 children, only 3 of whom lived to adulthood.  The children were: William G. born and died 1884, Mabel Catherine 1886-1958, Grace M. 1889-1945, William 1891 to before 1900, Blanche, 1892-? (Blanche married at least 3 times and I haven’t located her death record yet).

It appears that William and his family moved to Cleveland, Cuyahoga, Ohio for a short time.  They were enumerated there in the 1900 census.  What precipitated the move?  Was it his work?  However, by the time of William’s death in 1909, the family was back in Detroit.

Let’s try to fill in the years between their marriage in 1884 and his death in 1909 by checking some city directories.

NOTE: Although I’ve been trying for the past 2 hours to bring up the images of the city directories on Ancestry, I’ve had no luck.  Even switching browsers didn’t help.   I will continue this search another time, and also try my luck on Fold3.

Here is a photo of William (courtesy of my cousin, Bonnie).  A little blurry, but it's all I have. 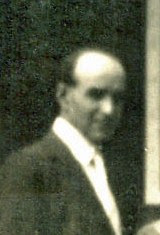 William and Catherine are buried in different cemeteries.  According to Elmwood Cemetery staff, there is no headstone for William.  However, I have created a memorial for him and you may visit it here #149488550.

If you are related to either of the THORPE or THORP families mentioned here, I’d love to hear from you.  I’m always eager to hear from new cousins.

OTHER POSTS THAT YOU MAY FIND INTERESTING

THOUGHFUL THURSDAY - Why don’t I have a death date or record for William H. Thorpe? (this was a particularly interesting afternoon of research that you may find helpful)