This post is a bit of a change from my regular posts. In this case I am writing about a young man, not a member of my family, killed by a drunk driver.
That drunk driver, Hubert L. Pepper, is connected to my family by marriage. He was the husband of a 2nd cousin, once removed. 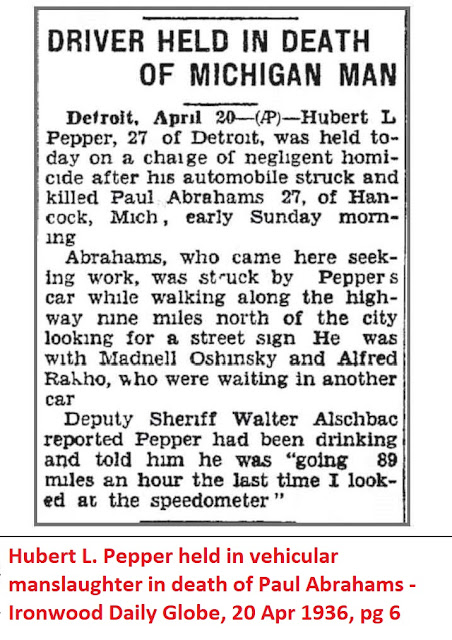 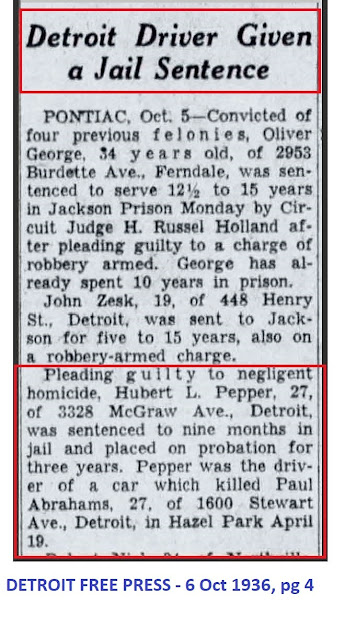 I thought I would honor the memory of the young man he killed.
I’ve done what research I can about Paul Abrahams and this is what I found out.
Paul Abrahams was born 15 Jun 1909 in Hancock, Michigan. It appears he was the youngest of four or five sons. His parents were immigrants. Morris Abrahams1, born in London, England and Rebecca Gold1, also born in London, England, according to Paul’s death certificate.
However, in reviewing census records and the passport application for Morris Abrahams, I believe both he and his wife were born in Europe (Morris in Poland and Rebecca in Germany). Both spoke Hebrew leading me to believe they were possibly of Jewish descent. Morris applied for a passport renewal in 1920, to return to Poland to be with his sisters.2
I also located Paul Abrahams name in the Hancock Central High School Yearbook for 1925, page 68. He was listed as a junior.
In 1926 we find Paul Abrahams listed as a senior at Hancock High School, page 101, titled Senior ROASTER. It’s pretty cute what they had to say about those listed here. The list gives Name, Occupation, Wants and Might Be. For Paul they listed the following:6
Name: Paul Abrahams
Occupation: Kidding ability
Wants: His own way
Might be: Bachelor

Here is the death certificate and FindAGrave memorial for Paul Abrahams. 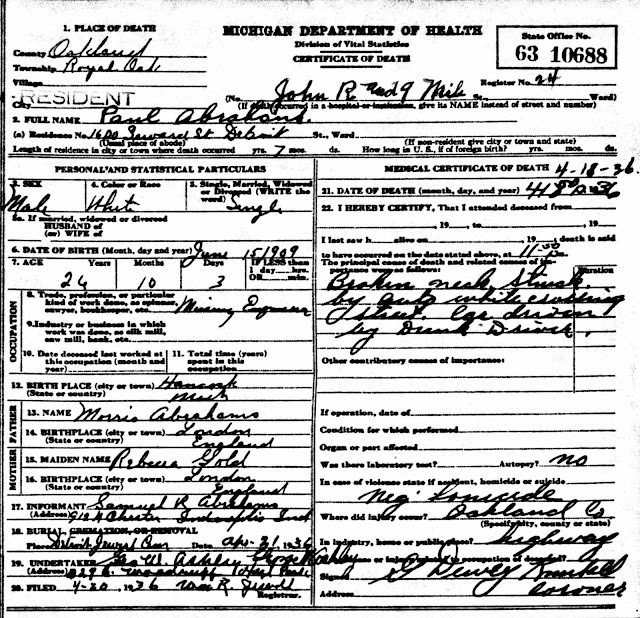 Cause of death listed on certificate – Broken neck, struck by auto while crossing street, car driven by drunk driver 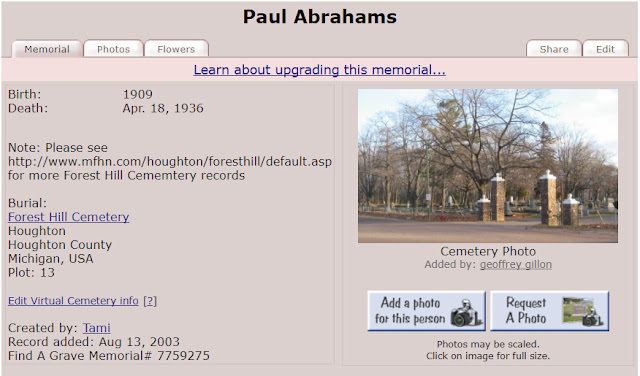 I’m sure the sudden death of Paul was a shock to his family and friends. May he rest in peace.
Drunk driving penalties have certainly changed (for the most part) in our country, since 1936. The driver in this case was only given 9 months in jail and 3 years probation.

That driver was the same age as his victim, only 27. I hope he made something of the rest of his life. Such a tragic story.
Sources:
1. Michigan death certificate for Paul Abrahams
2. U.S. Passport Applications, 1795-1925
3. U.S. Federal census 1910
4. U.S. Federal census 1920
5. U.S. Federal census 1930
6. U.S. School Yearbooks, 1880-2012
7. Newspaper articles courtesy of newspapers.com
8. Death certificate located on seekingmichigan.org (update Oct 2019 - the new website for Michigan death records is michiganology.org
Happy hunting,
Michigan Girl
Copyright © 2010-2017 Diane Gould Hall
ALL RIGHTS RESERVED. NO USE WITHOUT PERMISSION

Email ThisBlogThis!Share to TwitterShare to FacebookShare to Pinterest
Labels: #detroitmichigan, #drunkdriving, #michiganology, cause of death, michiganology