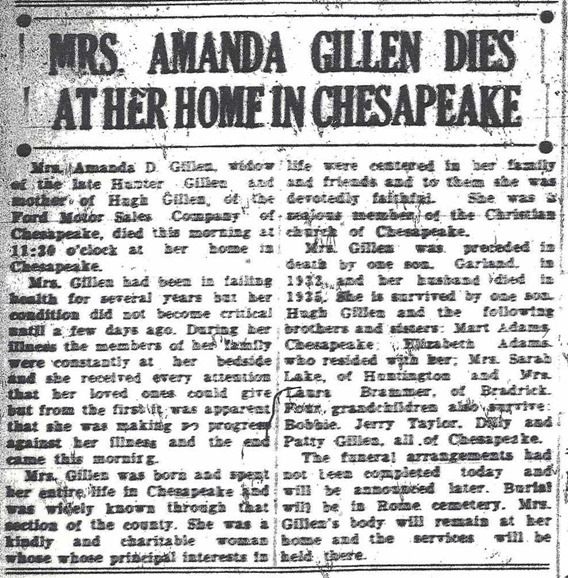 Amanda D. Adams was the wife of my 1st cousin, 4 times removed.  She is related to me via my maternal line.


Here’s how we are connected.

Mrs. Gillen had been in failing health for several years but her condition did not become critical until a few days ago.  During her illness the members of her family were constantly at her bedside and she received every attention that her loved ones could give but from the first it was apparent that she was making no progress against her illness and the end came this morning.

Mrs. Gillen was born and spent her entire life in Chesapeake and was widely known through that section of the county. She was a kindly and charitable woman whose principal interests in life were centered in her family and friends and to them she was devotedly faithful.  She was a zealous member of the Christian church of Chesapeake.

Mrs. Gillen was preceded in death by one son, Garland, in 1932 and her husband died in 1935. She is survived by one son, Hugh Gillen and the following brothers and sisters: Mart Adams, Chesapeake, Elizabeth Adams who resided with her, Mrs. Sarah Lake of Huntington and Mrs. Laura Brammer of Bradrick. Four grandchildren also survive: Bobbie, Jerry Taylor, Dilly and Patty Gillen all of Chesapeake.

The funeral arrangement had not been completed today and will be announced later.  Burial will be in Rome Cemetery.  Mrs. Gillen’s body will remain at her home and the services will be held there.

According to her death certificate, Amanda died of cardiac asthma, which she had suffered from for years.

If you think you are related to anyone mentioned in this post, please contact me.  I’d love to here from you.