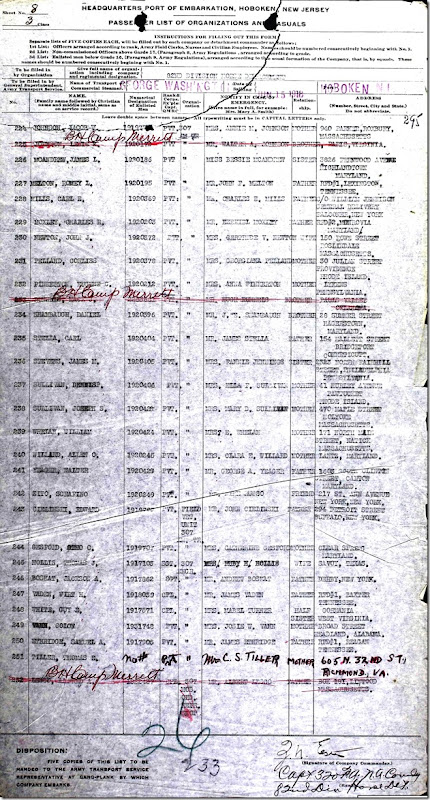 This is the very first time I’ve seen a U.S. Army Transport Service list.  According to the Citation Information found on Ancestry.com here is what this set of records contains.

The transport list shown above contains the name of Jackson A. Boskat (I wrote about his mother, Mary, yesterday in Sunday’s Obituary.

According to this record, this transport contained members of the 82nd Division Horse Detachment.  The name of the transport was George Washington, date of sailing 15 Jun 1918, Port – Hoboken, New Jersey.

Jackson A. Boskat is listed on line 246.  His military service number is 1917862, he is a Sgt and an Engineer.  This gives his father’s name as Andrew Boskat (which matches my records) and his residence as Derby, New York, which also matches my records.

Here is the section of that record which lists Jackson A. Boskat.

The next transport record I located for Jackson A. Boskat was almost a year later, when he returned to New York.

In this transport record are members of Company “D”, 307th Engineers.  They are on board the Santa Cecelia sailing out of Bordeaux, France on 27 Apr 1919.  They are headed for Camp Upton, Brooklyn, New York and it looks like they arrived on 9 May 1919.

Jackson A. Boskat is listed on line 136, with his service number 1917862.  He his a Private and an Engineer. His father is Mr. Andrew Boskat and his home is Derby, New York.

Observation – Jackson was listed as a Sergeant on the 1918 transport list.  I wonder what happened that he is now a Private?

Here is the section of that record showing Jackson A. Boskat.

This was an interesting find. I always enjoy discovering record sets I haven’t seen before.

Have you discovered any of your ancestors on military transport lists?  Are you like me and had no idea these lists existed?  Please let me know in a comment or on your own blog.