I'M IN SALT LAKE CITY AT THE
FAMILY HISTORY LIBRARY! 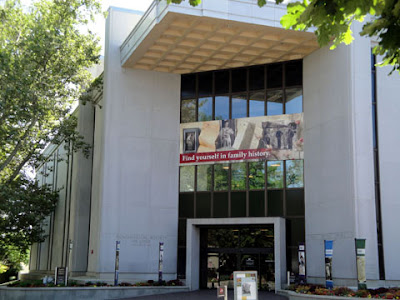 Hello again.  This is my story of Day 2 here at the Family History Library.

I decided I would tackle some records that were completely foreign to me. GERMAN records.  I don't have many German roots, but what I've found so far is on my maternal line.  In doing research in Pennsylvania on my FRAMPTON, GILLEN and HUNTER lines, I came across information on the MARTIN family.
Anna Barbara Martin (1747, Germany to 1822, Ohio) married John Frampton, Jr. in about 1780.  They are my 5th great grandparents.

From there I located a record on the Family Search website regarding the marriage record for Johann Eberhard Martin and Jacobina Elisabetha Wunderlich.

I go down to the second floor which has the European records here at the library and set up all my stuff.  Then I proceeded to pull that film.  I didn't know what to expect.  I don't speak German and don't really know any German words.  So, I asked for help.

TIP: The consultants are available beginning at 9 a.m.  The library isn't very busy first thing in the morning and it's a good time to avail yourself of the services of the experts.

A very nice man named Daniel helped me to decipher which were the birth, marriage and death records on the microfilm. He gave me a sheet of paper with the basic German words for things I would be looking for.

Let's get to the good part of this story.  I didn't turn that film handle more than twice and THERE IT WAS!!  OH MY GOSH!!
The 1745 marriage record of my 6th great grandparents, Johann Everhard Martin and Jacobina Elisabetha Wunderlich.

This record gives the names of both of their parents.  That's right, taking my family back one more generation.

Here is what the image looked like as I first saw it.  Can you see the record?
(CLICK ON ANY IMAGE TO ENLARGE IT) 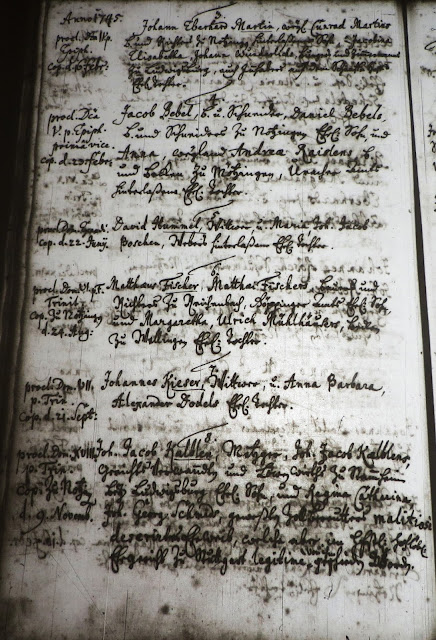 It was the very first record on this page.  Here is close up of the record.

Here is a transcription of this record as read to me from Daniel at the library.

"1745 16 Feb - Johann Eberhard Martin who is the son of the deceased Cunrad Martin, citizen and judge in Notzingen and Jacobina Elisabetha who is the daughter of Johann Wunderlich who is a citizen and carpenter in Ludwigsburg on the Schafhof."

Now I know Johann's father's name & profession and that he was deceased prior to 1745.  And the same with Jacobina's father, a carpenter in another city and apparently living.

I knew that this microfilm covered years from about 1650 so I decided to look for more records. OH BOY DID I FIND THEM!!

I won't go into all the details but here is a list of what I found and some images.  One record led to another and another and this is the order in which I located them.
Can you believe it?  Was this a gold mine of a microfilm or what?  I am so excited to continue my research and fill in the details for all of these family members.

Here are images of some of the records mentioned above.