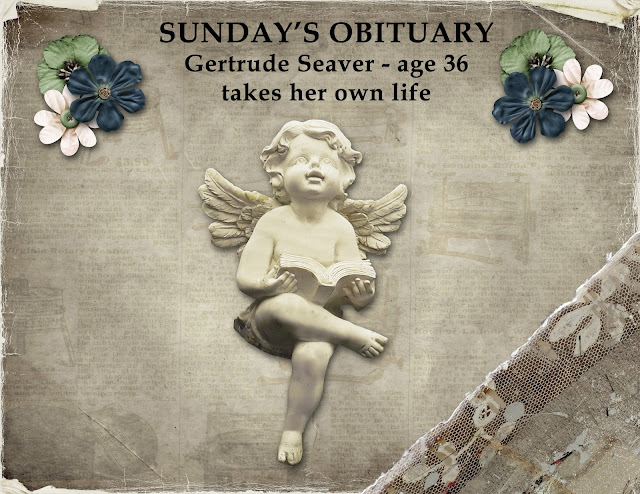 Today I’m writing the sad story of a young woman her took her own life, at age 36.

She married Bertram H. Seaver 17 Apr 1895 in Hamilton, Ohio.  Bertram is the husband of my maternal 1st cousin twice removed.  He married that cousin many years after Gertrude's death.

According to the 1900 census she had given birth to 2 children, neither of whom were living at the time.

In Jun 1903 she gave birth to a baby girl that the couple named Juanita Sunshine Seaver. She grew to adulthood and married.

We never know what causes someone to take such a drastic measure as Gertrude did on this day in 1908. If the obituary is to be believed, Gertrude was having mental or emotional issues.  Regardless, I imagine this left her family in tears.

Throws Herself Under Wheels of Traction Car

Body is ground almost to a pulp

Mrs. Gertrude Seaver takes her life in Cincinnati – is a sister of Eugene Smith, Formerly of the La Rue News – Unfortunate leaves a husband and daughter.

Mrs. Gertrude Seaver, thirty-six years old, born and raised near La Rue and a sister of Eugene Smith, formerly connected with the La Rue News, committed suicide in Cincinnati, Saturday, by throwing herself under the wheels of a westbound Cincinnati Melford and Loveland traction car.  Her mother, Mrs. Rominia Smith was an eye witness.  The tragedy occurred at Erie avenue and Grace street.

The suicide was the wife of Bertram Seaver, who was employed as an Inspector for a telephone company in Cincinnati.  She was demented, her condition seemingly have been rendered worse after she had grown very enthusiastic at a religious meeting a number of weeks ago.

Mrs. Seaver had been taking treatment from Dr. Mar Connor, and with her mother, had started for the doctor’s office.  She seemed rational.  As the big traction car approached Mrs. Seaver got close to the track.  Suddenly, as the car was about to pass, she screamed and deliberately threw herself beneath the wheels.  Her body was ground almost to a pulp.  The remains were removed to the morgue.

For weeks before she threw her body under the fast traction car, which was known as the Milford flyer, Mrs. Seaver had schemed to end her life.  A little over a week ago she attempted to drink carbolic acid.  She found the bottle about the house.  Her husband managed to get the bottle away from her.  She was closely watched as she frequently threatened to kill herself.  That she might be prevented from taking her life, Mrs. Smith went to live with her.  Saturday morning, she detained her mother until the car was about due, then calmly walked to her awful death.  She had informed herself at the time the car arrived at Erie avenue and Grace street.

Mrs. Seaver is believed by the members of her family to have been inspired to carry out this plan of self-destruction by reading the story of the suicide of G. W. Whittington, an inmate of the College Hill sanatorium, who threw himself under the wheels of a car.

Gertrude was interred at Mount Washington Cemetery in Mt. Washington, Hamilton, Ohio.  Her husband, Bertram, is buried next to her.  You may visit their memorials at Bertram #203005133 and Gertrude # 170861969.

If you are related to or connected to anyone in this blog post, please get in touch.  Let’s exchange information.