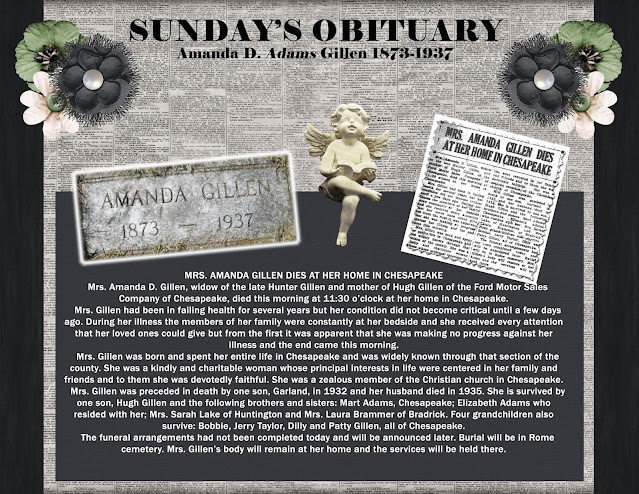 When I decided to write a Sunday’s Obituary post, I thought I would check my Legacy file and see just how many obituaries I had.  How many have I written about?

I was shocked to find that I have 449 obituaries. WOW!  I never thought I’d collected, saved and recorded that many over the years. I didn’t count how many I’d written about because I knew it was not even close to that number.  Guess I better get busy.

I began with the “A’s” and today I’m writing about the wife of a maternal 1st cousin, four times removed, Amanda Adams. My 4th great grandparents, William GILLEN & Rachel FRAMPTON are common ancestors for her husband, Martin Hunter Gillen & myself.

Here is the transcription of her obituary.

MRS. AMANDA GILLEN DIES AT HER HOME IN CHESAPEAKE

Mrs. Gillen had been in failing health for several years but her condition did not become critical until a few days ago. During her illness the members of her family were constantly at her bedside and she received every attention that her loved ones could give but from the first it was apparent that she was making no progress against her illness and the end came this morning.

Mrs. Gillen was born and spent her entire life in Chesapeake and was widely known through that section of the county. She was a kindly and charitable woman whose principal interests in life were centered in her family and friends and to them she was devotedly faithful. She was a zealous member of the Christian church in Chesapeake.

Mrs. Gillen was preceded in death by one son, Garland, in 1932 and her husband died in 1935. She is survived by one son, Hugh Gillen and the following brothers and sisters: Mart Adams, Chesapeake; Elizabeth Adams who resided with her; Mrs. Sarah Lake of Huntington and Mrs. Laura Brammer of Bradrick. Four grandchildren also survive: Bobbie, Jerry Taylor, Dilly and Patty Gillen, all of Chesapeake.

The funeral arrangements had not been completed today and will be announced later. Burial will be in Rome cemetery. Mrs. Gillen’s body will remain at her home and the services will be held there.

Amanda & Hunter had 2 sons, Hugh Loder Gillen & Garland A. Gillen. In 1900, shortly after their marriage, Hunter worked as a dry goods clerk.  By 1930 he was a co-proprietor at a Ford dealership, with his sons.

Amanda & Hunter were married for 35 years prior to his death in 1935. Amanda died two years later on 18 Jan 1937.  That is certainly a nice obituary write up about her.  Sounds like she was beloved by her family and the Chesapeake area.

Both Amanda & Hunter are buried at Rome Proctorville Cemetery in Proctorville, Lawrence, Ohio.  I have been to their gravesites. You can visit their memorials here – Amanda #31015043 and Hunter #66569356

If you find you are connected with this family, I’d love to hear from you.