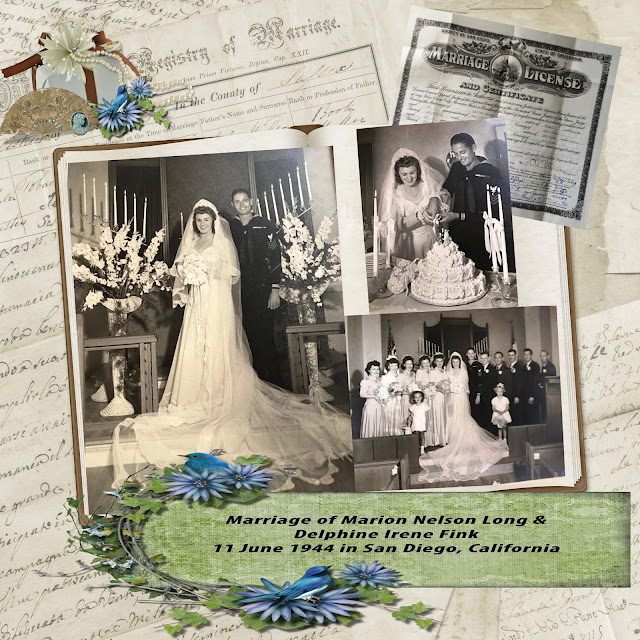 Today’s post is about my husband’s maternal Aunt & Uncle.  While Marion & Delphine may have been their given names, to everyone who knew them, they were Aunt Honey & Uncle Bud.

“Bud” was born 2 Nov 1914 in Cumby, Hopkins, Texas to parents Francis Marion Long and Lillian Gertrude Taylor.  By the time of the 1940 census he can be found living with his mother and his sister, Buna, in San Diego, California.

Bud had enlisted in the Navy as an Apprentice Seaman on 4 Jan 1934.  Is that what brought he and his mother and sister to California?  Bud reenlisted 13 Jan 1942.  That was just a little over a month after the bombing at Pearl Harbor brought the United States into World War II.

According to their daughter, Tammy, this couple met in 1938. On 14 Nov 1943 this engagement announcement appeared in the San Diego Union newspaper.

The couple was married at Rolando Methodist Church in San Diego by Methodist Minister, James F. Robert.  Witnesses listed on the marriage certificate are Honey’s sister Dorothy and her brother Elwood Fink. Their daughter, Tammy, was married in the same church 26 years later. 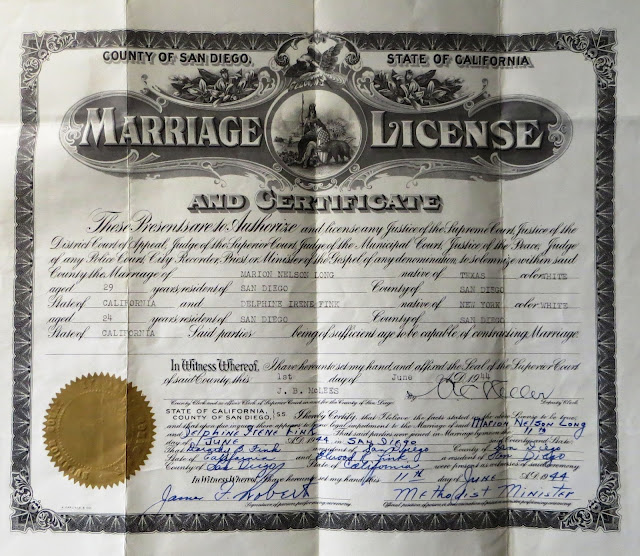 Both of these people were a lot of fun.  Honey had a great sense of humor and could always be found with a smile on her face.  Uncle Bud was a great cook and enjoyed gardening.  They were both very big personalities.  Time spent with them was always memorable.

I honor them here today.  And want them to know they are missed by so many.

Posted by Diane Gould Hall at 9:50 AM