PLEASE CLICK ON THE TRIANGLE TO PLAY ROBERT'S MEMORIAL VIDEO

BACKGROUND: Robert was the son of George Thornton (1881-1951) and Goldie Downing (1883-1962) of Muskegon, Michigan.  Robert was their youngest child.  He had older siblings, Lottie Mae, Goldie M., Marjorie and George “Williard.”

According to his headstone and military records, Robert was born 29 Aug 1919 in Michigan. NOTE: There is one record that gives his birthdate as 29 Sep 1919.

I first find Robert as a 4 month old in the 1920 census, in Muskegon, Michigan.  He again appears in the 1930 and 1940 census records with his parents, living in Muskegon, Michigan.
On 16 Oct 1940 Robert reported to the Local Board No. 2 in Muskegon, Michigan to register for the draft.  He is listed as 5’ 7 1/2”, 150 pounds, with brown hair, blue eyes and a light complexion.  He was working for Hercules Motor and he was 21 years old.
On 6 Mar 1941 Robert married Jacklyn M. Ritersdorf, in Definance, Defiance Co., Ohio.

Just 9 months after their marriage on 7 Dec 1941, Pearl Harbor was bombed. This as we all know, began the U.S. entry into World War II.

On 25 May 1943 Robert D. Thornton enlisted in the Army.  Less than 2 months later he and his wife, Jackie divorced. That means the divorce would have begun prior to his enlistment.  Did the divorce proceedings have anything to do with his enlistment?  I have no way of knowing.

However, just 18 days after the divorce was final, Robert married Paula Evelyn Johnson on 27 Jul 1943 in Comanche, Stephens, Oklahoma.

Robert was a Private First Class in the 378 Infantry Division, 95th Division, Company G.  According to military records Robert was killed in action, at age 25 on 6 Apr 1945 in Germany.  That means that Robert was killed just 32 days prior to the war’s end.  He made it for two years and then sadly, died just a month before he could have come home.

Robert's body was returned home for burial in October 1948, along with others from Muskegon, who had died in the war.  The local high school that Robert attended displayed a bronze tablet honoring those who had paid the ultimate sacrifice. 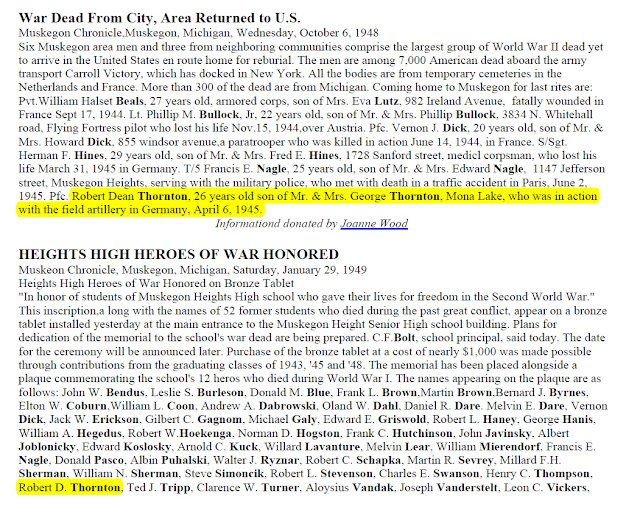 They also mentioned them and shared photos of them in the 1945 yearbook. 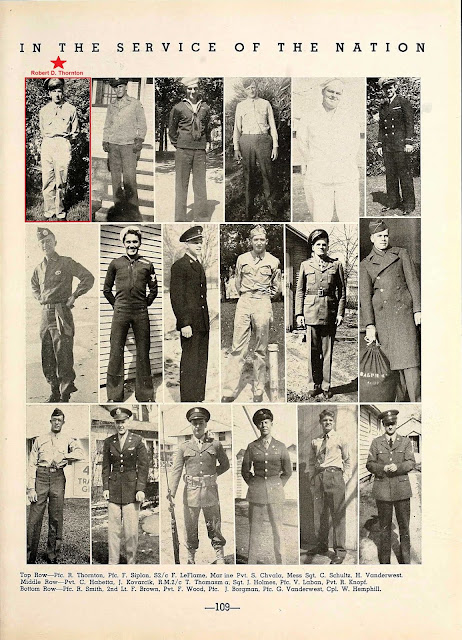 Robert is buried at Mona View Cemetery in Muskegon, Michigan. His headstone memorializes his service to our country.  You may visit his memorial here #46411967.

I am honored to be related to this military hero.  May he rest in peace.

If you are related to anyone mentioned in this post, or have additions or corrections, please contact me.