George F. Hall, my husband’s great granduncle, was born 3 Sep 1837 in New Jersey, the oldest son of Reverend George Hall and Almira Rosette Hall.  He had four younger siblings; Cornelia B.R. Hall, Charles A. B. Hall, Thomas Cornelius Hall and Susan Emily Hall.  According to his father’s obituary there was a 6th child born to the couple, but I don’t know what became of that child, when he/she was born or anything else, at this time.

By the age of 14, George F. Hall and his parents and siblings were living in Smithfield, Madison, New York.  All records indicate that George stayed in New York the rest of his life.  In the census taken in 1860, just prior to the beginning of the Civil War, George was living in New York City with the Howe family.  He was 23 years old and no occupation is listed for him.  Also in the household with him were his siblings, Emily & Thomas.  I have a death date for his mother, Almira in 1858.  The whereabouts of his father, Reverend George Hall is unknown in 1860.

Not only did George serve, but so did his brother Thomas Cornelius Hall (who is my husband’s direct ancestor), his great grandfather.
To learn more about Thomas’ service and his pension file you can read my blog post CIVIL WAR PENSION FILE ~ Cora E. Hall widow of Thomas C. Hall ~ What gems does it contain?

Page 3 from his pension file 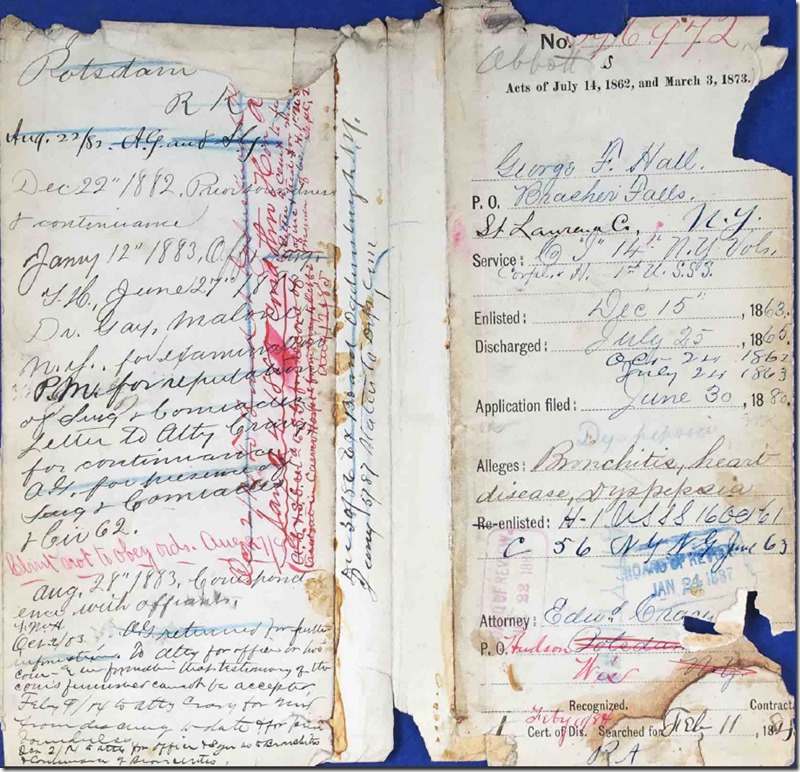 As I read through George’s pension file I learned that he experienced quite a bit of illness during his military service and that it continued for the rest of his life.  The entire pension file is focused on medical examinations and letters from George and others, trying to prove that he got sick in the service and remained so, which made him unable to perform manual labor.

Page 8 from his pension file 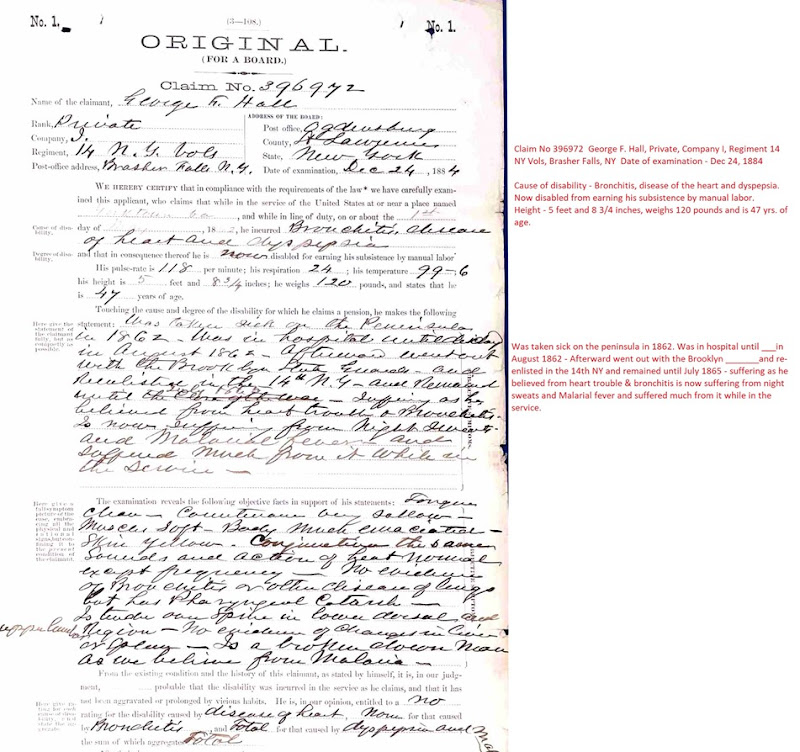 George applied for his Civil War pension in 30 Jun 1880.  You can find the pension index files on genealogy websites, such as Fold3, Ancestry.com.  These index cards then allow you to order the pension file.  The files vary a great deal in size and information contained.  I have some that are 50 pages long and others that are 225 pages.  The files can be ordered directly from NARA (National Archives) or from a third party.  I order mine from Twisted Twigs on Gnarled Branches Genealogy.  The turnaround is less expensive and quicker than what NARA can do.
I make no guarantees nor do I make any remuneration from referral to Twisted Twigs.  The service has worked well for me.
Here is George’s index card, that got me started in seeking his file. 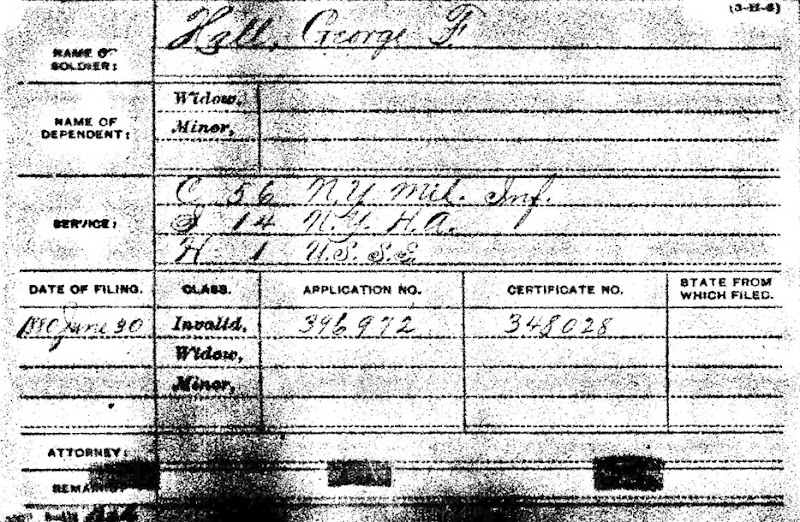 It seems that he contracted a fever, possibly Malaria and was taken sick in Yorktown, VA in April 1862.  In May of 1891 George was examined by a physician and said to be 5’ 10 1/2” tall, weight 124 pounds and 54 years old.  This physical description varies on some of the other examination records.  Was he 5’8, 5’9 or 5’10 1/2”? His statement to this physician is “I am totally disabled.”  He is also stated to have Dyspepsia (indigestion) and disease of the heart.

In Dec 1884 George was examined, yet again, and the doctor said “General appearance is unhealthy and very nervous, tremulous when he walks. Appears very much exhausted.  Exam of heart show no physical signs of heart disease.  In the opinion of this doctor he suffers from nervous exhaustion.”

Throughout the pension file, one thing is clear.  George F. Hall is not a healthy man.  Although it states that prior to his service he was quite healthy and able.

There are several letters back and forth to the Commissioner of Pensions.  Not only from George himself, but one letter from a Lieutenant named William Worsley Winthorp.
Here’s the letter written to George F. Hall from Lt. Winthorp.  Dated 9 Aug 1862 from Carver Hospital in Washington, D.C.

I found out about Lt. Winthrop via a Facebook group for the 1st U. S. Sharpshooters.  I searched Facebook to see if there was a group for them.  It’s not uncommon to find specific pages devoted to units from any of our wars. You can find that Facebook group here Company H, 1st U.S. Sharpshooters.  I was unable to read the signature on the letter above and posted a query to see if someone in the group could read it.  Someone responded and told me it was William Worsley Winthorp.  As it turns out Lt. Winthorp, who later became a Captain, was well versed in Military Law and taught at West Point for a while.

Although there isn’t much in the way of family information in this particular file, there was mention of George being married in 1869 and moving to W. Stockholm, New York where he began practicing medicine.  He practiced something known as Botanic Medicine, according to a statement in his pension file.  I found this definition of Botanical Medicine

“Herbal medicine, also known as herbalism or botanical medicine, is a medical system based on the use of plants or plant extracts that may be eaten or applied to the skin.”

However, his headstone is engraved with the word “surgeon.”  I wonder if I can find out more about George’s medical training?  When did he become a surgeon?

This is page 58 from George’s file.  A deposition from Gilbert Constable in Jun 1882. He states he had known George for 24 years, which would mean both before and after the Civil War.  He says George was able to do a “farmer’s work” and worked for Gilbert’s brother-in-law. 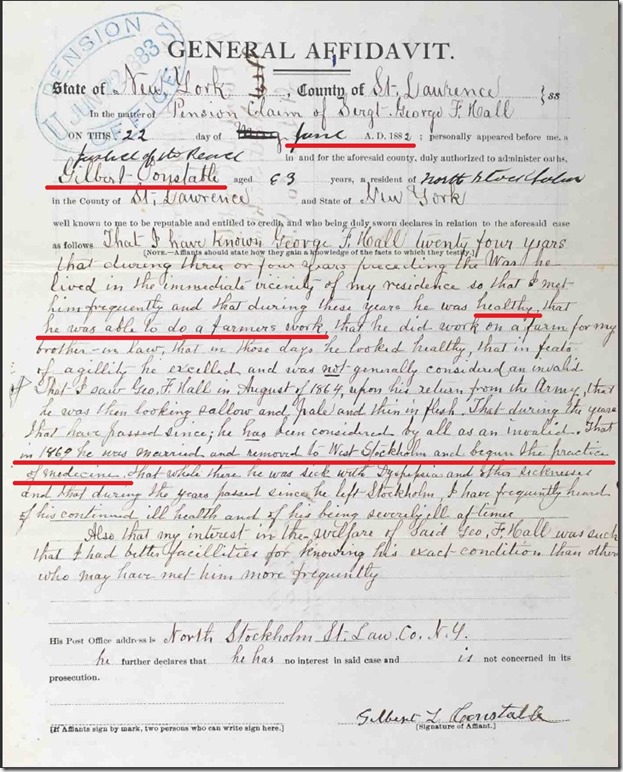 The last piece of information, important to my research, is the U.S. Pension Agency letter stating that the pension has been dropped due to the death of George F. Hall on 14 May 1896.  This date matches what I had located on his FindAGrave memorial.

One of the best finds I had in this journey with George, is finding his memorial on FindAGrave.com #81670494.  The memorial contained a photo of George in his uniform.  Being a thorough researcher, I wanted to find out how the person who posted the photo, knew this was George F. Hall.  I sent a message to Brian White who added the picture of George to his memorial.  I got a response almost immediately, not only granting permission to use the photo, but sending me an image of the back of it.  AND…..he sent me the beautiful ambrotype framed photo displayed at the beginning of this blog post.  It doesn’t get much better than that.  My sincere thanks to Brian.

Always remember, it never hurts to ask.  I can’t tell you how many positive responses I’ve received over the years.

Here’s the picture of George in his uniform and the back of that same photo.
As to George’s life after the war.  I find he and Sarah in the 1870 census, living in Stockholm, St. Lawrence, New York (just like the statement in his pension record said).  There are no children listed with them.  He is 39 years old and his occupation is listed as “physician.”

In 1880 he and Sarah are in Brasher Falls, St. Lawrence, New York and living with them is a Florence E. Wilson, age 26.  Based on earlier census records, I believe Florence to be Sarah’s younger sister.  Again, George is listed as a Physician.

In the 1890 Veteran’s census schedule, George is listed as living in Brasher Falls, St. Lawrence, New York.  I’m always so grateful for the 1890 veteran’s schedule, because it can put our Civil War ancestors at a place in time.  With the loss of the majority of the 1890 U.S. Federal Population census to a fire, this can be very helpful.

George’s wife, Sarah died 20 Sep 1892.  I don’t have a death record for her.  If she died in New York, you know their records are difficult to obtain.  She is buried with George and you can find her memorial on FindAGrave #81670795.

George died 14 May 1896.  There is an obituary posted on his FindAGrave memorial.  I have looked long and hard on various newspaper sites and have not found this obituary.  I will continue to look for a copy of the actual newspaper article.  As with Sarah, I have not located a death record yet, either.

I do hope that George and Sarah lived a happy life together.  His obituary said he had “many friends, lived alone after Sarah’s death and lived an exemplary life with a Christian spirit.”

If you are related to anyone mentioned in this blog post, I’d love to hear from you.  Likewise, if you have any corrections or additions, please contact me.