SURNAME SATURDAY
FENNER
FENNER, Grace Hunter (1874-1946) - she is my great grandaunt. So that makes her the sister of my great grandmother and an aunt to my grandmother.
Grace & her first husband, Charles Henry FENNER (1859-1918) were married in Belmont County, Ohio on 16 May 1891.  They had no children.  He died during the influenza epidemic of 1918.  I have found quite a few family members from various branches of my tree who succumbed to the influenza during that time.
Charles FENNER's family business was photography.  He and his brothers had photography studios in Cincinnati and Lima, Ohio and Huntington, West Virginia.
Charles' father Nicholas Paul FENNER married Ellen MADDY in 1856 and they had 4 sons & 3 daughters.
Here is how I am related to the FENNER family:
Nicholas Paul FENNER (1828 - 1908)
relationship to you: father-in-law of great grand aunt
Charles Henry FENNER (1859 - 1918)
Son of Nicholas Paul
Grace HUNTER (1874 - 1946)
Wife of Charles Henry
James Gillen HUNTER (1832 - 1884)
Father of Grace
Florence HUNTER (1869 - 1946)
Daughter of James Gillen
Florence Lee Nora BOWDEN (1888 - 1986)
Daughter of Florence
Patricia Anne MILNE (1924 - )
Daughter of Florence Lee Nora
Michigan Girl
You are the daughter of Patricia Anne
﻿ 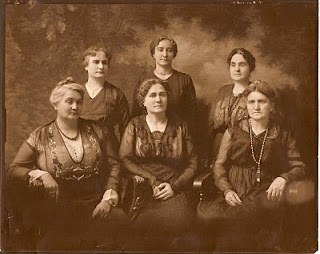 Grace HUNTER FENNER and her sisters.  Grace is in the back row, far left

I have quite a few photos from my mother's family that were taken at the Fenner Studio in Lima, Ohio.  My mother remembers "Aunt Grace."
So with all the photos that must be floating around from this family, having owned a photography studio for several decades, I'm hoping someone out there has more pictures to share.  I would certainly love to have pictures of the Fenner brothers and any other family members.
That's all for today,
Michigan Girl
Posted by Diane Gould Hall at 2:39 PM