Timelines, historic events and military service
The day after the Presidential election in the United States 2012. From what I can gather there are about half of the citizens happy and the other half disappointed. In reviewing our history we know that conflict over politics has gone on since we became a nation. Somehow we have survived it all. Have you ever looked at a timeline for your ancestors?

What elections were they involved in?

Do you know if they voted regularly?

Which party did they belong to?

Who were the Presidents during their lifetimes? For those of you using personal databases. You can generally run a timeline for your ancestor from the software. It's as easy a click of your mouse. Now, what appears in the timeline is another story. A timeline for their lives is only as good as the information that you input. Except of course for the historic events. I use Legacy Family Tree Software (this is not Family Tree Maker). There are tabs that allow me to click on a title called Chronology (another word for timeline). Once I do this I can see things like how old they were when their mother or father died, their age when their children were born, when they moved form place to place etc. There is an "option" button that allows me to insert various historic events, like US Presidents and US Wars. I just used this option for my maternal grandfather. He was born 8 Jan 1883 in Detroit, Michigan and died 27 Sep 1957 in Detroit, Michigan. During his life there were 14 different Presidents and 4 wars. How did these events change your ancestors life? Did they? My grandfather lived through the Spanish-American War, World War I, World War II and the Korean War. He was too young for the Spanish-American War and did not serve in any of the other wars. Did your ancestor serve in the military? If so, what branch, which war? There are several ways to discover the answers to these questions. The very BEST of which is to talk to your ancestor. OK, well, that isn't always possible is it? So what other sources do we have for finding out if they served in the military? Here are a few: Look documents that have been saved & handed down through generations. These might be records of service, discharge papers, loan records (when a veteran applies for a VA loan), pension records, photographs of the ancestor in uniform (look for the military insignia), awards or plaques or medals that were given to your ancestor. Look online at the various websites that offer information about the wars our ancestor served in. Again, the usual sites are Ancestry.com, Fold3 and familysearch.org. You might also want to use your search engine, such as Google to search for veteran organizations that would have information about your ancestors service, the people he or she served with and where they served. Have you thought of looking on FindAGrave.com? Sometimes when you find a headstone for an ancestor you will see a reference to military service. I've even found them buried in national cemeteries (where only those who served or who are related to those who served are buried. My husband's parents are both buried at Ft. Rosecrans National Cemtery in San Diego. One of my ancestors, Wm. W. Frampton is bured in Kansas and his headstone lists his military unit. 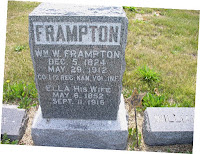 Look for websites about the military bases or training bases. These are good sources for background and some have photos of the bases and the people who served or trained there. So, be vigilent, be persistant and think outside the box.